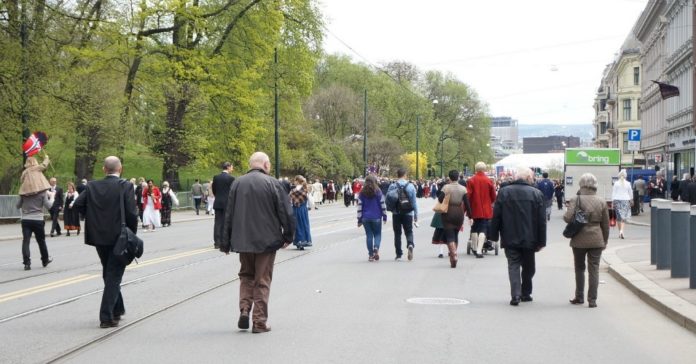 Citing a “global responsibility” regarding climate change, the newly-seated Oslo city council voted last month to ban the use of cars within their city entirely by 2019.
“The move to a car-free city center has seen support from all sides of the political landscape, and has, among others, gained support from the youth division of our ruling Conservative party,” said Eivind Trædal, an Oslo Green Party representative, in a Huffington Post interview. “Removing cars from the city center has been recommended both to make [the] area more accessible, and to reduce local pollution.”
The new council – a coalition led by the Green, Labor and Socialist Left party members – devised a plan to cut Oslo’s greenhouse gas emissions circa 1990 in half over the next five years, and by 95 percent by 2030. In order to transition to Europe’s first permanently car-free capitol, Oslo will add approximately 37 miles of bike lanes, and increase investment in public transportation.
“The time for climate action is now, and the new city government will address climate change both locally and globally,” Oslo Green Party member Lan Marie Nguyen Berg told the International Business Times. “The reduction in pollution will make the city even better to live in, and ensure that we take our global responsibility.”
To further this commitment to sustainability, Oslo City Council will divest a $9 billion pension fund from fossil fuels.
“Divestment sends a strong message to the world prior to the Climate Change Conference in Paris that we need a strong agreement that will ensure that we avoid dangerous global warming,” continued Nguyen.
The United Nations leads a conference on climate change, COP21, in Paris beginning Nov. 30

. The conference aims to create a legally-binding, universal agreement on climate change policy with the end goal of limiting global warming below two degrees centigrade. Scientists worldwide have agreed should human activity collectively cause an increase that exceeds this, climate catastrophe will ensue and human civilization will struggle under extreme conditions like those seen under Typhoon Haiyan and Hurricane Katrina.

This Article (Oslo Goes Green) is a free and open source. You have permission to republish this article under a Creative Commons license with attribution to the author and AnonHQ.com.