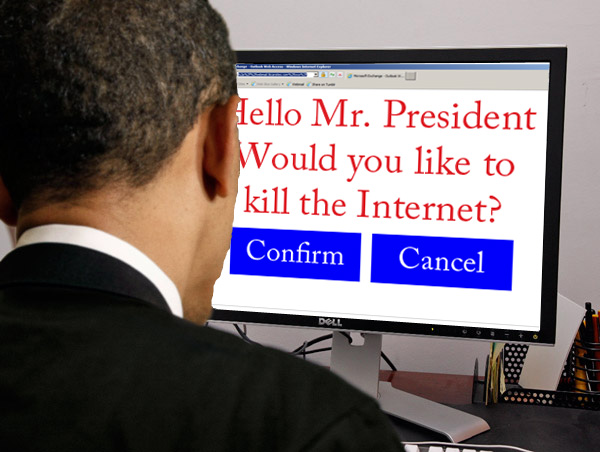 It is no secret that those in power want full control over the internet and heck they have had some good attempts at trying to get it. Other than all of the recent news on net neutrality and the TPP deals that allow the government to shut down any desired website using a simple copyright excuse, we have something possibly even more corruptively powerful… an internet kill switch.

One of the things that the government has already won full control over however, is the mobile phone, they can tap your phone calls, intercept your messages, read your emails, track you and even use your camera. But to put the cherry on top, they have a mobile phone kill switch too!

The cell phone kill switch has been around for over a decade now, introduced by homeland security under the name ‘Standard Operating Procedure 303’, which allows “…for the orderly shut-down and restoration of wireless services during critical emergencies such as the threat of radio-activated improvised explosive devices.” In other words, any access to the internet, phone calls or texts via your mobile can be easily be locked at the governments own free will.

Officials can cut service “within a localized area, such as a tunnel or bridge, and within an entire metropolitan area.”

The policy was first introduced as a reaction to the 2005 London subway and bus bombings when the government announced that it was a necessary implementation in order to keep national security. You may even find some conspiracy theories suggesting that the entire bombing was just an excuse to implement the kill switch policy. he switch has been used several times already, and not always because it was a ‘threat to national security’; In 2005, service was cut off in New York’s Hudson Tunnel due to unclear reasons and in 2011 connections were cut on San Francisco’s BART (Bay Area Rapid Transit) to try and prevent protesters from communicating when protesting against an officer who killed a homeless woman. Again in 2011, the government claimed that they had the right to “control private communications systems in the United States during times of war or other national emergencies.”

According to CNET and the huffingtonpost, a new senate bill sponsored by Senator Joseph Lieberman will now give the president authority to “seize control of or even shut down portions of the Internet.” – Another kill switch, but this time for the entire internet.

The excuse for this one seems a little more plausible, although this kind of power should not be available to anyone. The cut-off is said to only be used “in the event of a cyber attack capable of causing massive damage or loss of life.”

The new bill enforces that any private broadband providers, search engines or software firms must comply with the government’s demand to shut down upon request, or fines will be placed.

Although, the president doesn’t have full control over shutting down the web… He will need Congressional approval after controlling the network for over 120 days… hooray!..

This Article (The Government’s Internet And Cell Phone ‘Kill Switches’) is free and open source. You have permission to republish this article under a Creative Commons license with attribution to the author(FLU5CH) and AnonHQ.com.