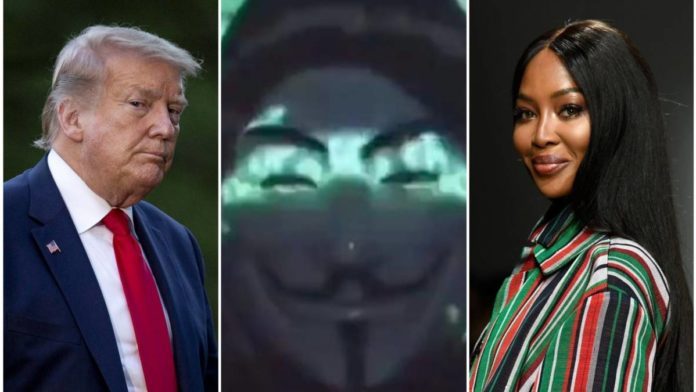 Anonymous has hit back along with the George Floyd protestors revealing what they call “The Little Black Book of Jeffrey Epstein”.

Last night, the group of cyber activists known as Anonymous launched a threat towards the US government after the death of George Floyd. The reason given by the group is that if the government was not willing to bring justice in the case, then they would begin to expose some of the crimes that the US has been hiding.

Anonymous on the offensive

A few hours after the Anonymous video hit the internet, the cyber activists exposed the relationship of renowned personalities with the Jeffrey Epstein child trafficking network. These names included Ivanka and Ivana Trump, Naomi Campbell, Chris Evans (the English TV host, NOT the Marvel actor), Mick Jagger and Will Smith, just to name a few.

The list with hundreds of names on it was uploaded through a file on their social networks under the name of “The Little Black Book of Jeffrey Epstein”, and in it they exposed all the people who attended parties organised by Jeffrey Epstein, where it is said that he “recruited the children.”

The case of Jeffrey Epstein was so impactful that Netflix released a documentary about it. After his guilt had been proven, the businessman is said to have taken his own life rather than spend it behind bars, although there are some who do not believe he committed suicide, but instead was murdered to prevent him from revealing information about others.

Athough names such as Ivanka and Ivana Trump appear, the group of cyber activists also launched a direct threat against the President of the United States, Donald Trump, whose name also appeared on the aforementioned list and has been accused of raping minors. He is also alleged to have a record on organised crime, a reason given for why he is being blackmailed by Russia, a country that has all the necessary evidence against him.

In addition, Anonymous removed the Minneapolis police website, hacked Chicago police radio to pronounce “Fuck the Police”, and exposed the royal family for having been involved with the Princess Diana murder. Their message is that the police keep arresting protesters instead of arresting the real criminals, and so more secrets will continue to come out.