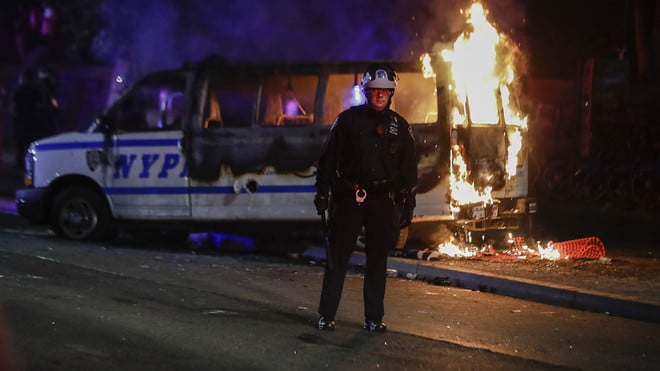 As riots (and some peaceful demonstrations) spread across the country, leaving two dead in what’s undoubtedly the worst outpouring of America’s long-simmering racial tensions to rock the US in decades, two Federal Protective Service officers suffered gunshot wounds in Oakland Friday night, leaving one of them dead, police said.

The shooting occurred as at least 7,500 people took to the streets of the city as riots and outrage over the murder of George Floyd at the hands of a white police officer spread to more than a dozen cities around the country.

By the end of the night, there were reports of vandalism, looting and conflagrations roaring across the city as protesters clashed with officers, according to the Oakland police.

Some arrests were made – but police were unable to offer specifics.

Earlier in #Oakland : Rioters use a mini bulldozer during the riots in that citypic.twitter.com/Dym89pcTaw

Reports of officers being shot, and shooting rioters, are trickling in from around the country. The Federal Protective Service, which is part of DHS, provides protection to federal buildings and key government officials. Police are investigating the incident.