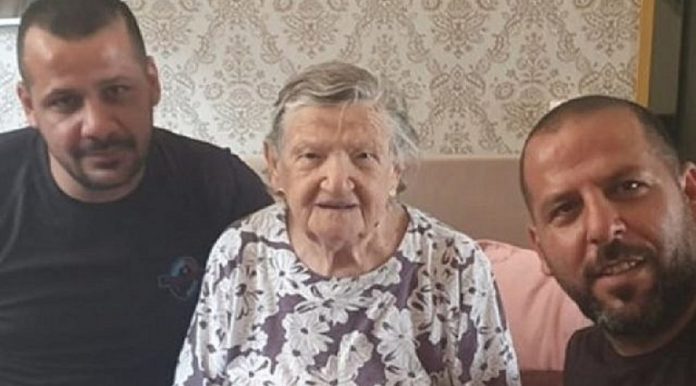 Two Arab plumbers waived a nearly $300 fee when they learned that their client, an Israeli Jew, was a 95-year-old survivor of the Holocaust.

The Times of Israel reports that Simon and Salim Matari, who are Arab citizens of Israel, were called to the home of Rosa Meir, an elderly Jewish woman whose home in Haifa had a major leak.

While Simon was fixing the leak, Salim began chatting with the woman about her life. He soon learned that she survived the Holocaust.

“When we got there, we saw there was a large blast of water and we started fixing it.

At some stage, while working, my brother Salim started to talk to Rosa about her life. She told us she’s 95, a Holocaust survivor, and that she has a daughter.

Her life story touched my heart. At that moment, I decided I won’t take a cent from her.”

The total cost of their service amounted to roughly $285 USD (1,000 NIS), but the Mataris couldn’t charge her.

When Simon took out his notepad to write up his bill, he instead wrote: “Holocaust survivor, may you have health until 120 [years old], from Matari Simon and Matari Salim,” adding that the service cost amounted to “0 shekels.”

Rosa was immediately brought to tears, according to Israeli Channel 12 News.

She told the station:

“The brothers really surprised me … It was so moving and uplifting, and I thanked them a lot.”

For Simon Matari, however, the gesture was purely “from their hears.”

Simon also promised that if the elderly survivor ever needed further services, they would happily return to fix her plumbing problems, free of charge.

Often when we hear about problems in the so-called “Holy Land,” we imagine two peoples—Jews and Arabs—with intractable problems rooted in Biblical times.

However, the crux of the problem lies in the fact that the indigenous Arab population of Palestine lost most of their land in 1948 when European Jews—many of whom fled the Holocaust or settled in the region following World War II—drove the indigenous Arab population from their homes and villages in the bloody campaign of conquest known to Palestinians as the nakba, or “catastrophe.”

Since then, relations between Israeli Jews and Palestinian Arabs—with or without Israeli citizenship—have been fraught with tension and conflict, with Arab citizens facing racist discrimination, unequal treatment, and widespread human rights abuses by the Israeli government. Palestinians, in turn, have resisted against these injustices and fought, sometimes violently, to regain their rights in their ancestral land. And so the conflict has evolved.

However, this story shows that oftentimes, empathy trumps the complicated historical baggage and politics that these conflicts entail, and defy the stereotypes that condition people to expect the worst from the “other.”

Instead, despite all the odds, basic human kindness can triumph over all obstacles.