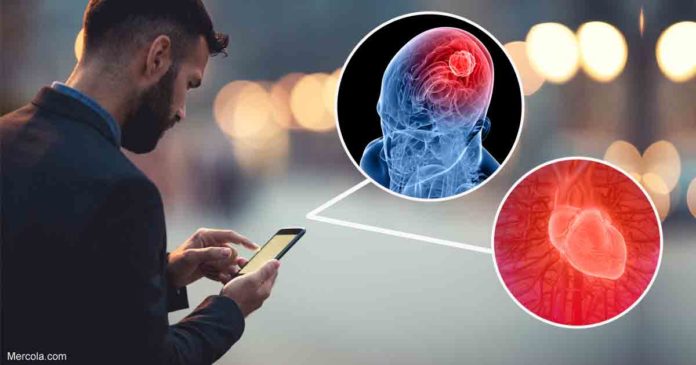 The thing is, it’s not just cell phone radiation, but rather a plethora of electromagnetic radiation that’s currently being beamed out by our cell towers, cell phones, computers, wireless routers etc. It’s a complete sandwich and not one safety study has addressed just how much electromagnetic radiation is currently present in our environment and what our current human exposure levels are. Perhaps this is because it’s becoming so evidently clear that there are no safe levels of exposure. Now, multiple studies are emerging on the topic that is raising a clear cause for concern.

There are already existing issues with current technologies, but right now, 5G wireless is making a lot of noise. Research has also shown that the same frequencies used by the Department of Defense in crowd control weapons actually form the foundation of the 5G network.  Dr. Sharon Goldberg, an internal medicine physician & professor recently gave her testimony at a hearing in Michigan about the dangers of electromagnetic radiation. It’s a very powerful testimony.

Wireless radiation has biological effects. Period. This is no longer a subject for debate when you look at PubMed and the peer-review literature. These effects are seen in all life forms; plants, animals, insects, microbes. In humans, we have clear evidence of cancer now: there is no question We have evidence of DNA damage, cardiomyopathy, which is the precursor of congestive heart failure, neuropsychiatric effects…5G is an untested application of a technology that we know is harmful; we know it from the science. In academics, this is called human subjects research.” – Goldberg

You can watch the entire video and read more about it here.

There are currently hundreds of scientists that have been petitioning the United Nations to look into this topic more deeply. Ask yourself, why are there more than 2,000 peer-reviewed studies that show what we are doing with EMF exposure is not safe?

According to the appeal sent to Antonio Guterres, Secretary-General of the United Nations, about the EMF issue:

Numerous scientific publications have found that EMF affects living organisms at levels far below international exposure guidelines adopted by most industrialized nations. There is discrepancy in how this matter is considered at the WHO, however. While WHO accepted its International Agency for Research on Cancer (IARC)’s recommendation that classifies both ELF/EMF and RF/EMF as Group 2B “Possible Carcinogens,” it also, in direct contrast to these warnings, recommends the adoption of the International Commission on Non-Ionizing Radiation Protection’s (ICNIRP) guidelines for exposure standards. These guidelines, developed by a self-selected 2 independent industry group, have long been criticized as not protective given the science now established.

This information, and much more, is exactly why multiple countries around the world have completely banned cell phones when it comes to young users, cell phones in school, wireless internet within elementary schools, daycare and pre-schools.

Awareness in Europe seems to be progressing at a faster rate than awareness in North America. Take France for example, they passed a law in 2015 banning WiFi from all nursery schools. In addition to that, the law states that Wi-Fi must be turned off in all elementary schools when it’s not in use. A wired connection, if possible, is preferred. When it comes to cell phones in France, all advertisements must recommend headsets to reduce the phones radiation exposure to the brain. Furthermore, advertisements directing cell phone use for young children are banned.

“Putting it bluntly they are damaging the living cells in our bodies and killing many of us prematurely.” –
Dr. Martin Blank, Ph.D., from the Department of Physiology and Cellular Biophysics at Colombia University (source)

Researchers with the renowned Ramazzini Institute (RI) in Italy announced that a large-scale lifetime study of lab animals exposed to environmental levels of cell tower radiation developed cancer. A $25 million study of much higher levels of cell phone radiofrequency (RF) radiation, from the US National Toxicology Program (NTP), has also reported finding the same unusual cancer, called Schwannoma of the heart, in male rats treated at the highest dose. In addition, the RI study of cell tower radiation also found increases in malignant brain (glial) tumors in female rats and precancerous conditions including Schwann cells hyperplasia in both male and female rats.

The study’s findings are making headline news. Read the Corriere Di Bologna article “Cellulari, a study by Ramazzini: “They cause very rare tumours.”

Our findings of cancerous tumours in rats exposed to environmental levels of RF are consistent with and reinforce the results of the US NTP studies on cell phone radiation, as both reported increases in the same types of tumours of the brain and heart in Sprague-Dawley rats. Together, these studies provide sufficient evidence to call for the International Agency for Research on Cancer (IARC) to re-evaluate and re-classify their conclusions regarding the carcinogenic potential of RFR in humans,” said Fiorella Belpoggi Ph.D., study author and RI Director of Research. (source)

The Study exposed 2448 Sprague-Dawley rats from birth all the way until their natural death to cell tower radiation for 19 hours per day. The exposures mimicked base station emissions like those from cell towers antennas, and this is an important point,

“All of the exposures used in the Ramazzini study were below the US FCC limits. These are permissible exposures according to the FCC. In other words, a person can legally be exposed to this level of radiation. Yet cancers occurred in these animals at these legally permitted levels. The Ramazzini findings are consistent with the NTP study demonstrating these effects are a reproducible finding,” explained Ronald Melnick Ph.D., formerly the Senior NIH toxicologist who led the design of the NTP study on cell phone radiation now a Senior Science Advisor to Environmental Health Trust (EHT). (source)

Here’s another telling quote about the study, coming from Lennart Hardell, MD, Ph.D., physician-epidemiologist with the Department of Oncology, Univesity Hospital, Orebro, Sweden, who has published extensively on the environmental cause of cancer including Agent Orange, pesticides and cell phone radiofrequency radiation.

The US NTP results combined now with the Ramazzini study, reinforce human studies from our team and others providing clear evidence that RF radiation causes acoustic neuromaa (vestibular schwannoma) and gliomas, and should be classified carcinogenic to humans. (source)

Ramazzini Institute investigators have completed nearly 500 cancer bioassays on more than 200 compounds, and their study design is unique in that animals are allowed to live until their natural deaths in order to allow detection of late-developing tumours. Eighty percent of all human cancers are late-developing, occurring in humans after 60 years of age.

Below is an interview with the lead author of the study:

If you’d like to access more information and science regarding the electromagnetic radiation problem, be sure to visit the Environmental Health Trust(EHT). There are still several issues of critical importance that need to be addressed without somebody rolling their eyes at you. This is one of them.

What You Can Do

So, what can you do about it? Well, you could turn off your cell phone when you get the chance. You could have a wired internet connection, which is also faster than wireless. You could unplug some of your appliances before you go to bed, you can purchase electromagnetic shielding materials, like bed canopies, sheets, clothes, paint to protect your entire home etc. These materials are out there, all you need is an internet search to find them.

You could also write to your government or local authority. You can create awareness by citing the science and showing it to others. At the end of the day, there are a number of ways to limit your exposure, but the truth is, it doesn’t have to be this way. These signals can be transmuted without the use of damaging high-frequency radiation, so ask yourself, what’s really going on here? Why are we purposefully selecting frequencies that harm humans?

You can also keep a healthy immune system, one that can fight off and defend any disease or harm caused by these exposures. Here at CE, we’ve created a lot of awareness about the mind-body connection and how strong it is. Fear will only make things worse and doesn’t help when trying to spark your very own placebo effect.

We’ve been living with this technology for some time, but only now are younger generations actually being born into it.

This is one of many examples where industry science is clearly shown to be false, as there are a number of repeatable scientific studies showing otherwise. This is an important issue, and even more important is the recognition of the corporate control over government policy. We clearly do not live in a democracy, when so many people can become aware and concerned about an issue, yet it never receives any attention from the mainstream media and is constantly swept under the rug, while the corporation maintains its safety.

How could a human being, the one who is making these decisions and approving these process, do such a thing in good conscience? The takeaway here is to recognize that ultimately, a shift in consciousness is needed. Ethics, morality and a desire to do no harm to the human race is needed and should represent the core of our technological and intellectual advancements. These examples show us the backwards nature of how we are living so we can recognize it within ourselves and begin to operate more harmoniously. As we do in our individual lives, the greater collective does as well. No longer can we rely on a broken system to fix our problems, we have to take the initiative, like all of the people mentioned in this article are doing.