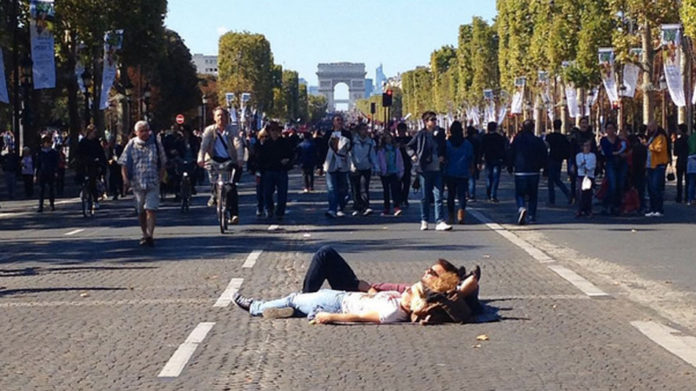 Paris has implemented a monthly “no-car day,” where vehicles are banned and the most popular streets are free for pedestrians.

Since September of last year, Paris has been implementing a “no car day” once every month in an effort to reduce air and noise pollution.

True Activist reported on the first no car day and even published a follow-up article that confirmed that the day without cars was a success, so making it a monthly affair was the obvious next step for Anne Hidalgo, the city’s mayor.

Every month, the city experiences a day free from vehicles in the major parts of the city from 11 AM to 6 PM, and everyone is able to move freely on the streets in a way that they normally can’t. While the streets are used by more cyclists and pedestrians, other events such as soccer games and yoga are also held.

Residents and tourists alike are very pleased with having no cars for a day, even if it means finding other ways to move around the city. One resident said,

“I think especially when the weather is like that, beautiful sunshine, we feel like it’s the holidays for us.”

Along the Seine and in the city center, where the highest concentration of vehicles is, Paris now sees a drop of 40% in nitrogen dioxide each time they ban cars for the day and 20% in other areas, such as Place de l’Opera.

Though there is some disappointment that police would not allow the entire city to ban cars for the day, allowing only 30% of Paris to participate, the monthly vacation from air and noise pollution is welcomed.

French officials had decided to make a change in their approach to pollution after a spike in air contaminants made Paris the most polluted city in the world. The smog became so thick that it nearly clouded the city’s most popular landmark, the Eiffel Tower.

Although the measures that Paris took to combat the smog levels were a success, the city is hardly exemplary when it comes to their pollution. The residents aren’t forced to have regular smog checks on their car to prevent the noxious, black smog from being emitted from vehicles, contributing greatly to their air pollution.

Fortunately, Paris’ days without cars are well-coordinated and even planned out through the summer because other cities that have attempted the initiative have not had the same success. The world can only hope to follow the lead of this iconic city and implement similar measures to protect the environment.

This article (Paris Now Has A Monthly “No Car Day” That Brings A 40% Drop In Air Pollution) is free and open source. You have permission to republish this article under a Creative Commons license with attribution to the author and TrueActivist.com