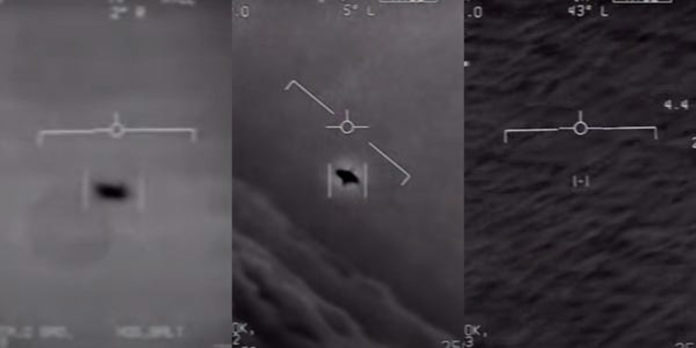 The US Department of Defense has released three declassified videos of “unexplained aerial phenomena”.

The US Department of Defense today officially released three short videos of “unidentified aerial phenomena” – aka unidentified flying objects – that it still apparently doesn’t have an explanation for.

The footage has already been widely circulated online, thanks to Blink-182 guitarist Tom DeLonge: he is on a mission to obtain and publicly distribute UFO sightings via his To The Stars organization, and revealed the trio of videos between December 2017 and March 2018.

Now Uncle Sam has itself emitted the material online, which shows Navy pilots observing strange stuff mid-flight. The Pentagon said it released the videos “to clear up any misconceptions by the public on whether or not the footage that has been circulating was real, or whether or not there is more to the videos.”

The first video, code-named FLIR presumably after the thermal-imaging tech involved, shows an encounter in 2004 off the coast of Mexico. A Navy fighter recorded what the commanding officer of Strike Fighter Squadron 41, David Fravor, called “a 40-foot long tictac shaped object hovering above the water,” with no wings nor rotor wash. His aircraft circled the object, which in turn circled him, Fravor claimed, but when he approached the object it headed away at “supersonic” speeds.

The other two pieces of footage, codenamed GOFAST and GIMBAL, are dated between summer 2014 and March 2015, and were shot on the US East Coast between Virginia and Florida. In the first vid, codenamed GOFAST, a pilot targets a small, seemingly fast-moving target over the water. “What the f**k is that thing!” he cries. You can judge for yourself below.

GIMBAL shows an object, or a fleet of them as one pilot says, spotted moving at high speeds against 120 knot winds and seemingly rotating in flight. One of the pilots who witnessed the event, Lieutenant Ryan Graves, told The New York Times the object would skip between sea level and 30,000 feet at “hypersonic speeds.”

“After a thorough review, the department has determined that the authorized release of these unclassified videos does not reveal any sensitive capabilities or systems, and does not impinge on any subsequent investigations of military air space incursions by unidentified aerial phenomena,” the Pentagon said today.

The Pentagon has previously studied recordings of aerial encounters with unknown objects as part of a since-shuttered classified program that was launched at the behest of former Sen. Harry Reid of Nevada. The program was launched in 2007 and ended in 2012, according to the Pentagon, because they assessed that there were higher priorities that needed funding.
Nevertheless, Luis Elizondo, the former head of the classified program, told CNN in 2017 that he personally believes “there is very compelling evidence that we may not be alone.”
“These aircraft — we’ll call them aircraft — are displaying characteristics that are not currently within the US inventory nor in any foreign inventory that we are aware of,” Elizondo said of objects they researched. He says he resigned from the Defense Department in 2017 in protest over the secrecy surrounding the program and the internal opposition to funding it.
Reid tweeted Monday that he was “glad” the Pentagon officially released the videos, but that “it only scratches the surface of research and materials available. The U.S. needs to take a serious, scientific look at this and any potential national security implications.”
And some members of Congress are still interested in the issue, with senators receiving a classified briefing from Navy officials on unidentified aircraft last summer.
“If pilots at Oceana or elsewhere are reporting flight hazards that interfere with training or put them at risk, then Senator Warner wants answers. It doesn’t matter if it’s weather balloons, little green men, or something else entirely — we can’t ask our pilots to put their lives at risk unnecessarily,” Rachel Cohen, spokeswoman for Democratic Virginia Sen. Mark Warner, told CNN at the time.

The aerial phenomena observed in the videos remain characterized as “unidentified.” Which is nothing new. Likely explanations for the strange blobs can be found here: