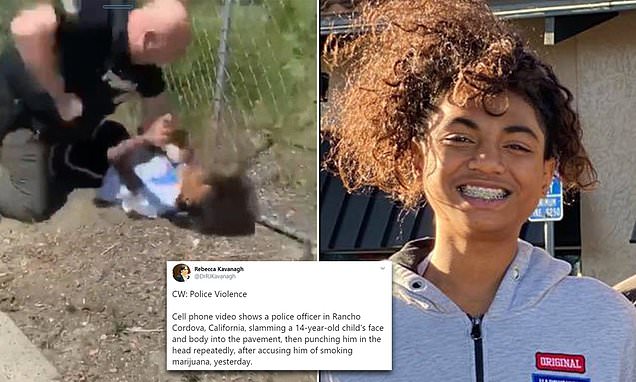 This is the horrifying moment a 14-year-old boy is repeatedly punched and slammed to the ground by a cop in California who suspected him of being in possession of marijuana.

Video footage shared on Twitter on Tuesday shows an incident in Rancho Cordova, California where the police officer has Elijah Tufono’s hands pinned behind his back but continues to thrash his body around and deliver blows.

His mother, Leata Tufono Tagalu, said the juvenile has a serious heart condition, supraventricular tachycardia (SVT), that thankfully did not trigger at the time of the incident on Monday but said Tuesday, ‘mentally he’s still not sure’.

‘This sort of brutal assault could have had fatal consequence,’ criminal defense attorney Rebecca Kavanaugh warned in a tweet that repeated his sister Yralina Tufono, 20’s claims.

His sister said he was still suffering from chest pain a day after the violent encounter on Monday.

Video shows a Problem Oriented Policing (POP) Officer in Rancho Cordova, California punching the teen and slamming his head and body into the ground. The incident occurred on Monday:

Elijah Tufono’s mother shared an image of him on Facebook as she said he is ‘scratched up, has chest pains and he’s sore’. ‘He has SVT but thank God it did not trigger at the time of the incident or now,’ Leata Tufono wrote. ‘Mentally he’s still not sure’ 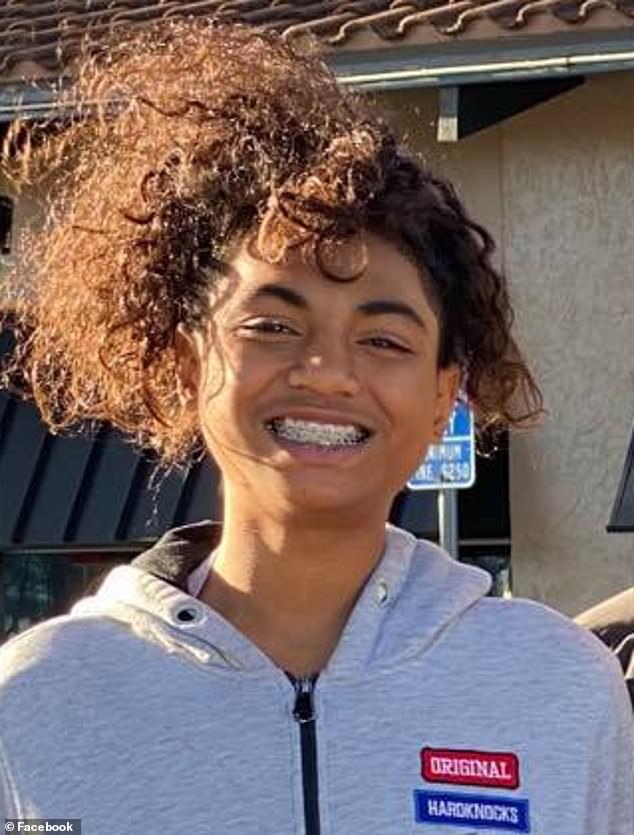 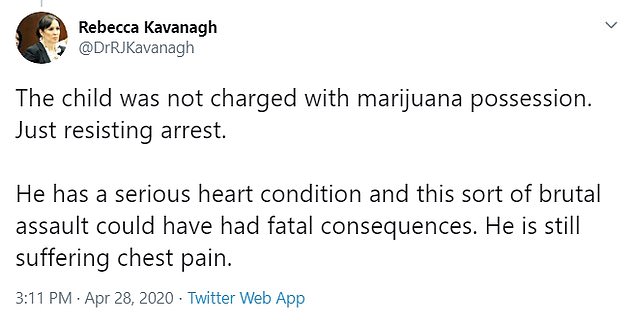 According to the police department the Problem Oriented Policing (POP) Officer was proactively patrolling the area of Mills Station Road and Mather Field due to complaints from citizens about hand-to-hand sales of alcohol, tobacco and drugs to minors and saw what he believed to be a hand-to-hand exchange between an adult and juvenile.

The department stated that the cop lost sight of the adult in the area and when he approached the juvenile, ‘the juvenile was uncooperative and refused to give the deputy basic identifying information’.

‘He told the deputy he was 18 years old. Having reasonable suspicion that criminal activity was occurring, the deputy attempted to detain the juvenile so he could conduct further investigation,’ police continued in the statement.

‘The juvenile became physically resistive at that time, causing the deputy to lose control of his handcuffs, which landed several feet away. The deputy attempted to maintain control of the juvenile without his handcuffs and while alone waiting for his partners to arrive and assist him.’

The department said in the statement: ‘It’s important to put video footage into context, especially in relation to a use of force incident.’

They added the deputy ‘recovered tobacco products from the 14-year-old juvenile, which is presumably the reason for his resistance’.

The juvenile was cited for resisting arrest and released to his guardians.

The boy’s sister tweeted that he ‘was simply trying to get his arms free because he was in pain!!’

‘He’s a kid and has never been in any kind of trouble with the law!’ Tufono tweeted. ‘He was very scared and in so much pain!!!’

However the attorney clarified on Twitter that the child didn’t have marijuana on him, ‘just a Swisher (cigar).’ His mother confirmed on Facebook that he had an adult purchase a swisher for him before the cop arrived in an unmarked car.

‘I think it matters zero if he was smoking marijuana,’ Kavanaugh tweeted.

She said the family of the child asked for the video to be shared in hope the officer is fired or charges are brought upon him.

One shocked follower replied to her Twitter thread: ‘This is what he’s comfortable doing in public, while recorded. Now take a moment to consider what he does when he knows no one can hold him accountable.’

A social media user responded: ‘I was thinking the same. One of those punches alone could have killed that poor kid.’

Another posted: ‘Too young to smoke Marijuana but not too young to get Punched in the face?’

A third wrote: ‘This is a 14 year old child! The heavy handedness with black and brown kids starts early. This is why there is a Black Lives Matter movement. Police routine do not acknowledge the humanity of black people – at 18 no more punches by the cop – he’s pulling the trigger.’

The Sheriff’s Office and Rancho Cordova Police Department have started an investigation into the use of force by the deputy in an effort to maintain public trust and transparency.

‘The police department added in the statement: ‘This type of situation is hard on everyone–the young man, who resisted arrest, and the officer, who would much rather have him cooperate.

‘The community should know our deputies have a heart for the Rancho Cordova community, especially for the youth they serve through the schools, PAL sports, and our new Youth Center.’