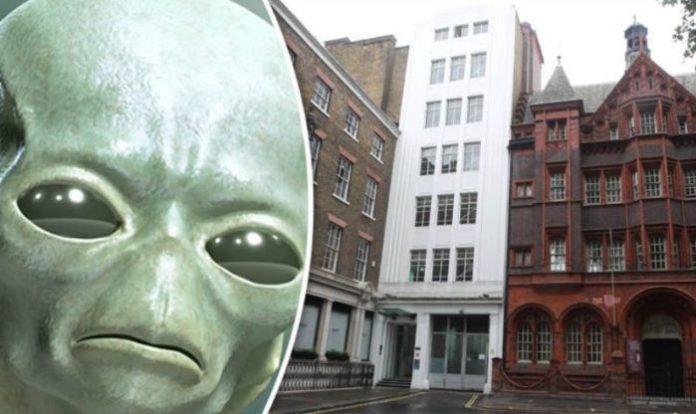 It has been revealed that the defense headquarters of the United States, the Pentagon, is running a former unit of the British military, investigating Unidentified Flying Objects (UFOs).

According to the Express newspaper, when the MoD announced its decision to close down the UFO unit, the Americans quickly and quietly stepped in to preserve it. The funding of the unit thereafter, became the sole responsibility of the United States’ government. After the Pentagon took over the responsibility of the unit, it moved the offices of the unit near the UK headquarters of 20th Century Fox, to 7 Soho Square, London. 20th Century Fox is famous for producing science fiction movies such as Alien, Independence Day, The Martian and Star Wars.

The Express reports that the team operating the unit is mostly Americans, but also included a small number of Brits. According to the newspaper, the team disguises itself as tourists, while undertaking the highly clandestine program without the knowledge of the public.

All members of the team are said to be military and intelligence officials. The Americans regularly visit the unit from Washington, carrying out research and other highly classified assignments. “There was pressure from a similar unit in the Pentagon which wanted to incorporate the MoD unit. It was decided to move the unit to Soho Square and I understand that it now has a number of American personnel. The relocation was even accidentally published in the MoD’s magazine, though few noticed,” the source said.

The source claimed although the unit is fully under the control of the Pentagon, the Americans still report directly to the MoD. According to the source, while The X-Files are still on the agenda, much of the unit’s work now concerns the militarization of space. The X-Files is the longest-running science fiction series in network television history, in which special agents of the FBI investigate unexplained, mind-bending cases known as the “X-Files.”

Also, some of the unit’s efforts appear to concern Project Condign, a secret and far-reaching MoD investigation into UFOs released under Freedom of Information laws in 2005.

UFO is any apparent anomaly in the sky that is not identifiable as a known object or phenomenon. UFOs are associated with claims of visitation by extraterrestrial life or government-related conspiracy theories. The issue has become popular in many science-fiction movies.

UFOs have been subject to investigations over the years that varied widely in scope and scientific rigor. Governments or independent academics in the United States, Canada, the United Kingdom, Japan, Peru, France, Belgium, Sweden, Brazil, Chile, Uruguay, Mexico, Spain, and the Soviet Union are known to have investigated UFO reports at various times.

Some researchers believe that UFO sightings may be attributable to atmospheric plasma, which might in turn lead to the discovery of new military applications, including advanced laser weaponry.

Nick Pope, former head of the UK military’s UFO division told the Express that atmospheric plasmas may or may not be at least a partial solution to the UFO mystery. He said it is the potential for weaponization which might have caught the attention of the United States’ government, thus leading to the takeover of the UFO unit in London. Pope said: “When the MoD’s UFO project was axed in 2009 a much more narrowly focused research effort may have taken its place, following up on Project Condign’s recommendations that further work should be done on the potential for novel military applications.”

Head of the military sciences at the Royal United Services Institute, Liz Quintana also said the United States and Britain want to maintain their interests in space and weapon technology, due to the competition from Russia and China.

“Space is becoming increasingly contested and congested. Some of this is peaceful, some of it has dual use and some distinctly nefarious. Russia and China particularly are active,” Quintana said.

This article (Pentagon Takes Over Defunct UK Military’s UFO-Hunting Unit in London) is a free and open source. You have permission to republish this article under a Creative Commons license with attribution to the author and AnonHQ.com.