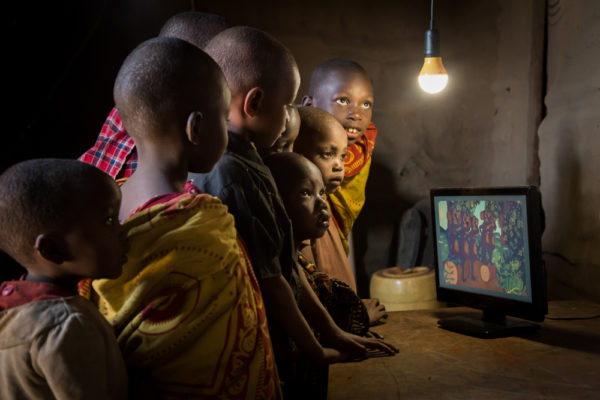 In many countries in Africa, it is very common to find villages and towns not connected to the national electricity grid. Such towns and villages have no choice than to depend on kerosene-powered lamps.

In such areas, people’s lives are restricted. They hardly get to know what is happening within their countries and beyond. Because there is no electricity, they do not have access to television, radio, and mobile phones, which serve as a common media for conveying information in Africa. The World Bank has declared 32 of the 48 nations in Sub-Sahara Africa, to be in complete energy crisis. According to statistics, from 2001 to 2005, Gross Domestic Product for over half of the countries in Sub-Saharan Africa, rose by over 4.5% annually, but sadly, energy generation capacity grew at a rate of 1.2%.

In 2011, the International Energy Agency estimated that about 600 million people in Africa are living without electricity. This figure is nearly twice the population of the United States, representing 43% of the 1.4 billion people worldwide who have no access to electricity.

However, recently, some start-ups have devised how to use renewable energy to solve this crisis in Africa. In East Africa, one of such start-ups is a company known as Off-Grid Electric. The company was founded by the American entrepreneur called Xavier Helgesen.

According to how Mr Helgesen founded his company, Helgesen was traveling through Malawi to meet with clients for his book-selling company, Better World Books. He stopped in Monkey Bay, a town of about 30,000 people, to spend the night before continuing his journey the next day.

When darkness came, Mr Helgesen realized that the town had no electricity. The town was not connected to the national grid. People were using kerosene lamps. When a family invited him to dinner, they all huddled under one dim light.

Mr Helgesen described his experience in Monkey Bay: “It was amazing to see that was how everyone lived.”

At that time, Helgesen had just started to learn about solar energy. When he returned to the United States, he had a bright idea. He said he thought that “If anybody needed solar power, it was the people living off the electricity grid.” He contacted his classmate at the University of Oxford’s business school, Erica Mackey. With the help of Erica, Helgesen started Off-Grid Electric in 2012. He started the company in Tanzania, where he is familiar with the terrain. About 85-90% of the population in Tanzania is not connected to the country’s electricity grid.

Off-Grid Electric today provides very affordable solar power to rural communities who are not connected to the national grid. Rural residents can power up their homes for as little as $6 a month. When someone signs up for a system, there is a $6 fee for Off-Grid to install solar panels and a meter to monitor their energy usage, along with LED lights, a radio and a phone charger that all work off the solar charge. It only takes a few hours to install these items. Then customers pay about $6 a month to access the power they need, about what they would have paid for kerosene in the past. Currently, Off-Grid has reached more than 100,000 households. The company employs more than 1,000 workers in Tanzania. The company is hoping to expand to Rwanda by the end of 2016. The goal of the company is to reach 1 million homes in Africa by 2017.

The company is fast growing. Many people are investing in the company. In December 2015, the company was able to raise about $45 million from stakeholders to expand the business. In January 2016, Off-Grid Electric won the prestigious Zayed Future Energy Prize for its creative, “massively scalable” business model. The company’s success in Tanzania has been widely praised. Lily Odarno, an energy associate at the nonprofit group, World Resources Institute said: “There’s a unique opportunity right now in Tanzania. You have a conflation of a number of important factors: A largely rural population with a low electricity rate, the availability of solar technology, which has improved over time, and technologies to ensure people can pay for their services.”

This article (People Living Off The Grid in Tanzania get Electricity a Brilliant Start-Up Solar Plan) is a free and open source. You have permission to republish this article under a Creative Commons license with attribution to the author and AnonHQ.com.