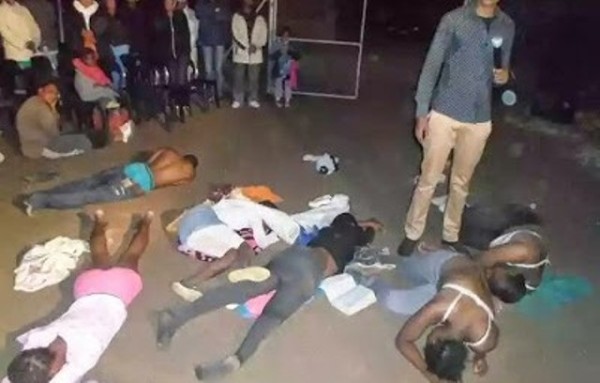 Last year, pictures showing some church members eating grass went viral on Facebook in the Republic of South Africa. It was later said that the pastor of the church commanded the congregation to eat the grass in order to get the power of healing from God. The incident generated a lot of debates about the activities of pastors with their own churches in South Africa and the rest of the African continent. The debate by the public was whether it is time for African nations to regulate these one-man churches to respect human dignity or not, since their activities are getting out of control in many nations in Africa.

As memories of that incident seemed to be fading off, another bizarre and controversial incident involving a pastor who made his congregation strip almost naked as he stepped on them to ‘receive the power of God’ has popped up on Social Media once again, bringing back the old debate about how individual churches should be regulated in the country. The Pastor has been identified as Penuel Tshepo of the End Times Disciples Ministries, in Soshanguve — a town situated about 25 km north of Pretoria, in Gauteng.

The pastor was alleged to have used odd methods to make members of his congregation act like ‘mad people’ and he took the opportunity to step on them as he preached, saying that due to the power of God they are not feeling any pain from his action. The pictures were first posted on Facebook by the church but later, negative comments from those who commented on it led to the pictures being taken off the page.

The pastor came under intense criticisms on the social media platform. Many people and religious critics accused him of faking the word of God and engaging in acts not associated with God. In the pictures, the church members were seen sleeping on the ground with some stripping down to the point that their underwear can be seen clearly.

In one of the pictures, a fully grown up man is seen licking the pastor’s boots while in a prostrate position on the ground, as if the pastor is the god that he is worshipping.

One of the associate pastors was also captured in the images jumping on members of the congregation. The picture was captioned by the church as, “Total Demonstration of God’s Power > No Pain felt in them, meaning God is with us. To God be the Glory.”

When the pictures were first posted, some followers of the page believed to be members of the church typed, “Amen,” in response to the captions. Some also liked the posts and urged the pastor to continue ministering that way. Social commentators have said that although the church members are adults and can think for themselves, the church needed to be regulated by law enforcement agencies in order to avoid any public indecent exposures.

Individually owned churches are very common in Africa. These individuals mostly use ‘miracles’ to lure people to their churches. They claim to have the power to remedy all diseases, changing peoples’ fortune for them to become rich and protecting them from witchcraft and other spiritual forces. In impoverished communities, where people live in abject poverty and ignorance, people fall for some of these churches. The churches in turn brainwash the people and whatever the pastors or church leaders ask from the members, it is done without any reasonable application. Many skeptics therefore say until people are educated and the conditions in which they live in are improved, these churches will also take undue advantage of them due to their desperation and ignorance.