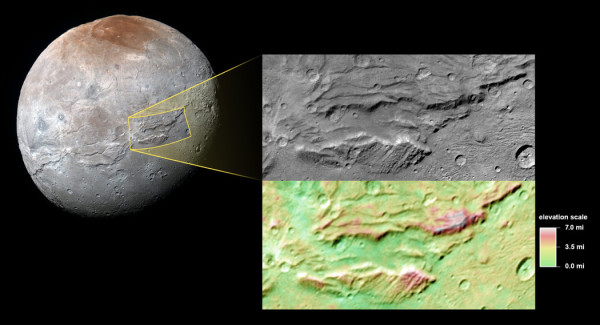 In the past, when we were in school, we were taught that Pluto was the smallest planet in the solar system, and the ninth planet from the sun.

However, as human beings continue to search for knowledge from the unknown, this theory is certainly outdated. Today, Pluto is called a “dwarf planet.” A dwarf planet orbits the sun just like other planets, but it is smaller. A dwarf planet is so small that it cannot clear other objects out of its path.

Apart from this revelation, scientists have recently made public some stunning secrets about Pluto. In July 2015, the National Aeronautics and Space Administration’s (NASA) New Horizons spacecraft was able to fly past Pluto. With its super-powerful cameras, the spacecraft captured a heart-shape region of Pluto. This region has now been named Tombaugh Regio. It was named Tombaugh to remember Clyde Tombaugh, the discoverer of Pluto.

After successfully retrieving all the data that New Horizons captured during the mission, scientists have made public, some amazing revelations about the planet, which are completely new to us on Earth. Scientists involved in analyzing the data have reported their findings in five articles published last week in the Journal Science.

It has been discovered that Pluto is largely an ice planet. The left half of it is covered mostly by nitrogen snow, while the right side is more methane ice.

For us on planet Earth, we know that the ice is more commonly frozen water. But on Pluto, nitrogen, methane and carbon monoxide freeze solid. Below, is a color image of Sputnik Planum, the region known as Pluto’s “heart,” which is rich in nitrogen, carbon monoxide and methane ices. Scientists have also discovered blocks of  water-ice jammed together to form mountains, which stand starkly adjacent to the flat plains of nitrogen-rich ices. The darker blocks in the plains region are likely icebergs of water-ice floating on top of denser nitrogen ice. Scientists said the varying mix of ices could form different alloys with very different properties, similar to how adding carbon transforms iron into steel, and that it could help explain the wide range of topography. The picture below was released by scientists to support their analysis. Scientists had earlier observed from Earth that Pluto was blotchy. Therefore, the flight trajectory of New Horizons was designed so that it would capture both dark and light blotches, during its flyby. Still, they wouldn’t have been surprised if the landscape turned out to be geologically bland. That’s because the sun, three billion miles away, provides little energy, and Pluto is so small – smaller than the Earth’s moon – that its interior could have cooled down long ago, according to scientists.

Scientists also discovered a volcano-like structure on Pluto. It is predicted that nitrogen might be flowing deep to be warmed by the interior, and then erupt back at the surface, producing what scientists are surmising might be an ice volcano.

It was also discovered that a mountain of about two miles, spanning 90 miles across, has a hole at the center. The mountain has been named “Wright Mons.” Another finding of Pluto, is the upper atmosphere, which is to be much colder, meaning that nitrogen escapes at a rate of about a hundredth of what had been expected.

Some scientists had expected Pluto to look somewhat like Triton, a Pluto-size moon captured into orbit around Neptune. But New Horizons photographed a dazzling variety of landscapes, from soaring mountains to flat plains. The images proved that Pluto is far more diverse, and differing from Triton.

“It’s not like any feature we’ve seen anywhere else in the solar system,” said John R. Spencer, a planetary scientist at the Southwest Research Institute. The head of Geophysics and Imaging at NASA’s Ames Research Center in California, Jeffrey M. Moore was also quoted as saying “the big surprise is that Pluto turned out so surprising.”

This article (Planetary Science: Scientists Discover more about Pluto that we didn’t Know [Images]) is a free and open source. You have permission to republish this article under a Creative Commons license with attribution to the author and AnonHQ.com.