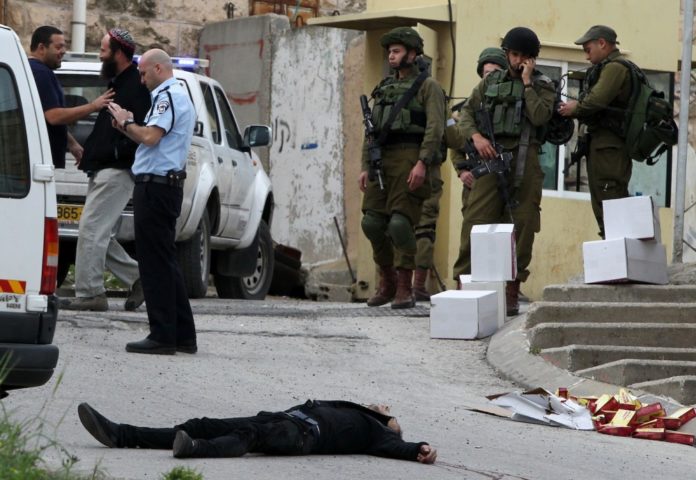 Video has arisen of an Israeli soldier executing an injured, barely-conscious, Palestinian suspect by shooting him in the head. The incident occurred after another soldier was injured in a stabbing attack at a Tel Rumeida check point.

Two suspects were killed, including the one who had been executed.  The men were identified by the Palestinian health ministry as Ramzi Aziz al-Qasrawi, 21, and Abed al-Fattah Yusri al-Sharif, 21. al-Sharif was the man who was executed.

The Israeli Information Center for Human Rights in the Occupied Territories, B’Tselem, released a statement noting that the video recording made by  “Emad abu-Shamsiyah, a Hebron resident, shows al-Sharif lying on the road injured, with none of the soldiers or medics present giving him first aid or paying him any attention at all.”

The video shows al-Sharif lying on the ground, incapacitated. He moves his head slightly, proving that he was in fact alive. Two ambulances are present, but the medics who were at the scene do not seem to be giving him medical assistance, and the various soldiers and men dressed in civilian attire ignore al-Sharif.

More than a dozen men can be seen in the video, witness to the execution. The injured Israeli soldier is seen being wheeled to an ambulance on a stretcher. He sits up, revealing that he is conscious and does not appear to be in pain or heavily injured.

Mondoweiss notes that, before the shooting, voices can be heard asking in Hebrew, “Is the dog alive?”

Human Rights Watch notes that “in the video, unidentified voices, speaking in Hebrew, can be heard saying: “Listen this dog is alive. Get it in their heads, sapper [combat engineer]. He deserves it.”

A soldier (later identified as a medic) wearing a cap strides forward, speaks briefly with a colleague wearing a helmet, and quickly and visibly cocks his rifle. He walks a few steps forward and takes aim, shooting al-Sharif in the head. A van moves between the cameraman and the victim, but not before the video captures the brutal (but censored) execution.

Notably, none of the 15 or so individuals present move to prevent the execution- indeed, they barely even react to the gun shot. More disturbing than the execution itself, Palestinian and Israeli observers point out that this indicates that extrajudicial executions have become routine. If so, numerous other incidents may have went unrecorded. Dead men tell no tales.

Absolutely horrifying. People around the executioner simply carry on, as if they didn’t just witness a murder https://t.co/kLNjjKK750

Finally an ambulance swings forward, perhaps finally to give the dead man “medical assistance”. It seems that this was the only sort of injury it was present to treat.

Lt. Col. Peter Lerner, a spokesperson for the Israel Defense Forces, admitted to The Intercept that they believed that the incident was legitimate.

“The IDF views this incident as a grave breach of IDF values, conduct, and standards of military operations,” he wrote. “A Military Police investigation has commenced and the soldier involved has been detained. All of the soldiers involved will be investigated as will the orders given.”

The executioner admitted to the killing during the ensuing interrogation. He claimed to have executed the prone man, who barely moved during the incident, because he was afraid that al-Sharif was about to detonate a bomb.  None of the other men at the scene seemed to have been particularly concerned about this “bomb”, milling about while chatting with their colleagues. His casual behavior while taking al-Sharif’s life also seems to indicate that he wasn’t feeling threatened.

The medic was not identified by Israeli media, but supporters who call him a hero have been referencing a Facebook profile of a man named Cpl. Elor Azaria who appears to match the appearance of the executioner in the video. Azaria was awarded a commendation for his service in a photo he uploaded in April of last year.

Mondoweiss notes that such incidents come with the implicit backing of the Israeli government.

On October 9, 2015, Defense Minister Moshe Ya’alon announced at a press conference, “Right now is it required to respond quickly to any local attack to eliminate the terrorist stabber or the perpetrator stone thrower and the like, immediately, on the spot.”

Human Rights Watch notes that the volunteer who filmed the incident was threatened by Israeli forces.

The B’Tselem volunteer who filmed the video, Imad Abu Shamsiyyeh, told Human Rights Watch in a phone interview that Israeli forces had threatened him both at the scene and later, when he went to give a statement to the military. A few minutes after he filmed the shooting from the roof of a nearby building, he said, “more journalists gathered on the roof, and the Israeli soldiers noticed us. They pointed their guns at us and screamed at us to get down. Soldiers came into the building and told the [owner] not to allow people there or the family would pay the price.”

During questioning at a military office in Hebron, Abu Shamsiyyeh said he felt the interrogator was trying to intimidate him to make him say that he had not filmed the video:

He told me, ‘How will you benefit from this video? It got a lot of publicity. Your name is known to everyone. Who is going to protect you and your family from right-wing Israelis? Remember you live in [Tel Rumeida], surrounded by Israeli settlers, who will be able to protect you there?’ I felt that I was being threatened. They took the original footage from me.

Survivors of the Holocaust have called Israel’s treatment of Palestinians “genocide” on various occasions in the past- it is ironic that the people who understand genocide the best have had to call out the actions of their own people in modern times.
Sources: The Intercept, B’Tselem, Mondoweiss. Human Rights Watch

This article (Israeli Soldier Filmed Executing Incapacitated Palestinian Suspect) is a free and open source. You have permission to republish this article under a Creative Commons license with attribution to the author(CoNN) and AnonHQ.com.