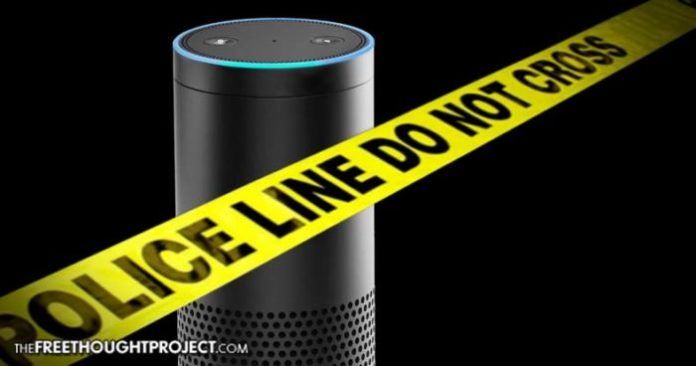 However, privacy activists have sounded the alarm on this Amazon smart device for some time now. Activists suspected the United Sates government via its spy agencies have been using the device to spy on citizens.

To confirm that the device is being used as a spying tool, anti-government corruption investigators revealed that Amazon owner Jeff Bezos was awarded a contract by the Central Intelligence Agency (CIA) worth $600 million to build a private cloud for the agency to use for its data needs. This means Bezos is a friend of the CIA, and can grant the agency full access to his business ventures.

Amazon’s close CIA ties have made some consumers, who own an Echo device, more skeptical. Recently, we published an article of how a woman who owns an Amazon Echo decided to verify the links between the CIA and the device. She used the artificially intelligent Alexa to confirm her suspicions shortly after WikiLeaks began releasing their Vault 7 series.

The woman asked the smart device whether she would lie to her, to which Alexa responded that she would always “try” to be truthful. Alexa is then asked to give a definition of what the CIA is, which is answered with accuracy. It’s then followed by another question from its owner, “Are you connected to the CIA?”  Alexa, rather than answer, chooses to switch off, not once, but twice, when the owner of the device repeatedly asked the question. This incident was recorded and posted on Twitter. When the video started trending, Amazon responded that the incident was nothing but a minor programming error.

However, recent evidence has emerged to back the existing suspicion that Amazon Echo is indeed a spy tool used by the US government.

In December 2016, Arkansas police in the city of Bentonville filed search warrants with Amazon, requesting for the recordings made on a man’s Echo device between November 21 and November 22, 2015. The recordings belong to James A. Bates, who was charged with murder after a man was strangled to death in a hot tub in his home.

CNET reports that during the investigation, police noticed the Echo in the kitchen and pointed out that the music playing in the home could have been voice activated through the device. While the Echo records only after hearing the wake word, police hoped that ambient noise or background chatter could have accidentally triggered the device, leading to more clues in the murder case. “It is believed that these records are retained by Amazon.com and that they are evidence related to the case under investigation,” police wrote in the search warrant to Amazon.

When the warrant was delivered to Amazon, the company was reluctant to give the recordings out. Investigators then issued a statement warning that whether Amazon complies with the warrant or not, they could tap into the Echo’s hardware, which could potentially include time stamps, audio files and other data.

Apart from Bates’ Echo, investigators also attempted to break into his phone, but were unsuccessful due to his password. In response to the delay in investigation caused by Amazon not sending the recordings and the phone password, the police department issued the following ominous response within the warrant: “Our agency now has the ability to utilize data extraction methods that negate the need for passcodes and efforts to search Victor and Bates’ devices will continue upon issuance of this warrant.” The police are right. They can seize access to the device without difficulty. According to Amazon, when Amazon Echo or Echo Dot detect the wake word, when you press the action button on top of the devices, or when you press and hold your remote’s microphone button, the light ring around the top of your Amazon Echo turns blue, indicating that Amazon Echo is streaming audio to the Cloud.

All of the audio in the room is recorded and stored, not just the question you’re asking Echo.

The device also records everything in the room prior to you using the wake word. When you use the wake word, according to Amazon, the audio stream includes a fraction of a second of audio before the wake word, and closes once your question or request has been processed.

When you go inside the Settings menu in your Alexa app on your phone, you can listen to every one of your requests by selecting History.

Just as the police noted in their murder investigation, there are times that Alexa randomly starts recording without the wake word being issued.

Luckily, deleting this audio is simple. Just follow these instructions:

In the History menu of the mobile Alexa app, you can delete specific entries one by one by selecting them and tapping the delete button. However, if you want to wipe your entire history, you’ll need to do so at the Manage Your Content and Devices page at www.amazon.com/mycd. Once logged in, you’ll see the page, Manage Your Content and Devices. From here, click on Your Devices. Select the device from which you want to delete the audio, and a sub-menu will appear under it. Click on Manage Voice Recordings, and then click delete. Before deleting, Amazon presents you with a warning.

Once you click delete, a brief popup comes up letting you know that “Your deletion request has been received.”

You can then check the mobile app and all voice recordings from that device will be immediately removed.

We acknowledge sourcing part of the article from the Free Thought Project.

This article (Police Confirm Amazon Echo Saves All Voice Data, Here’s How to Delete It) is a free and open source. You have permission to republish this article under a Creative Commons license with attribution to the author and AnonHQ.com.