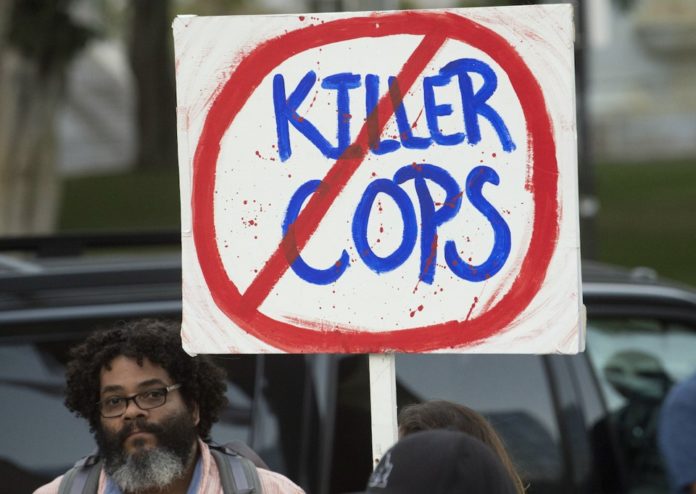 The People have raised legitimate protests against the rise of the murderous cop. Their protests have fallen on deaf ears it would seem, for if anything police murders continues on an accelerated path towards that Orwellian Police State everyone can see hurtling towards us but which nobody seems to be able to prevent.

In just the 5 months leading up to August, 14 police officers have been charged for on-duty murders… this   FIVE times what we would normally expect and tolerate from them and goes without counting the number of officers who DON’T get charge for their crimes. Last month, an Albuquerque judge had ruled that two officers of the “law” would stand trial for slaughtering a homeless man as he was about to surrender.

On that very day, “two former East Point police officers were indicted on charges that they murdered a 24-year-old father by repeatedly using their Tasers on him while he was handcuffed and sitting in a creek,” The Atlanta Journal Constitution reported.

And the day prior we got another case of  the same as  The Washington Post reported that “a former Fairfax County police officer was charged with second-degree murder, nearly two years after he shot an unarmed Springfield man who stood with his hands raised in the doorway of his home.”

As July came to an end, so too did the deliberations about the case of University of Cincinnati police officer Ray Tensing, who would go on to face murder charges for the shooting of an unarmed motorist.

In June Michael T. Slager was indicted for shooting 50 year old Walter Scott in the back.

In May some SIX officers were indicted for homicide and assault charges with regards to death of Freddie Gray who had been killed while in police custody. A Tulsa deputy who chose to use lethal force instead of the taser he had on him will also be charged with Manslaughter in April.

These numbers are telling because they don’t even factor in the number of cases that go without officers being charged; officers are often given the benefit of the doubt when evidence to the contrary is presented proving that they had acted intentionally to murder someone, often out of pure rage or due to some racially-motivated factor. Even without factoring in those cases where police do not get charged, the US has far surpassed the TOTAL number of police killings in England for the last FIVE years.

The number of police actually being charged for their criminal disregard for human life has certainly increased, because in the seven years prior to 2011 just 5.8 officers got arrested every year according to the figures presented by a Wall Street Journal report. Whether this increase is merely a temporary response aimed only at placating the People’s outrage at other such cases last year remains to be seen.

“A judge in Cleveland said that he believes there is probable cause to charge a police officer with murder for the death of Tamir Rice, the 12-year-old boy fatally shot while playing with a toy gun last year,” TheWashington Post reported in June, but the ruling, “does not amount to formal charges being filed against the officers involved.”

It warms my cold heart to hear that the number of officers who ACTUALLY get charged is on the rise, because it shows that we in the alt media have done a fair job in continuously preventing this atrocity from being buried beneath the other crap that gets put out by the Mainstream media, and shows that the People have had an effect on the so-called Justice system.

However, getting them arrested is only part of the story; the other three quarters requires that the police stop executing civilians with abandon… and that they also face a sentence that actually reflects the nature of their crime so that THEY are deterred from murder.
Sources: The Atlantic

This Article (Police Getting Indicted For Murder At A Record Rate) is free and open source. You have permission to republish this article under a Creative Commons license with attribution to the author(CoNN) and AnonHQ.com.