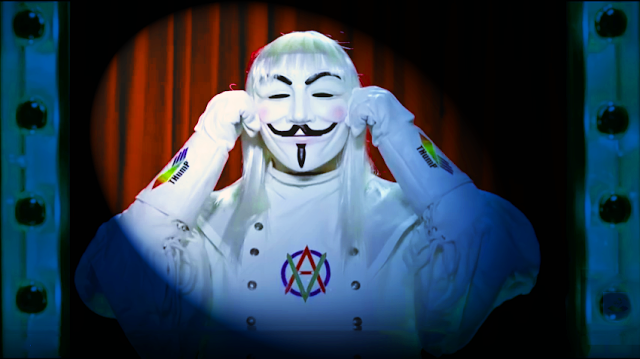 Disclaimer: We at the one of many Anon Media Factions, DO NOT support ANY political parties. Reporting on the Democrats, Republicans, Labor, Liberal, etc., of ANY nation is in no means, advocating for them. We hope our readers are INTELLIGENT enough to form their OWN opinions through the collation of many sources. The below article is no different. Facts discovered have been reported for reader information. Only you – as the reader – can decide what is best for you. ANONYMOUS stands for freedom of speech, freedom of choice, and here at the media faction, the freedom to report on topics of individual discretion.

One particular party, The Humanity Party, if voted into power, has vowed to end all citizen rights to own a gun. An amendment of the U.S. constitution would reflect this sweeping change; the citizen would be governed by an all-encompassing police and militia, ruled only by the president.

The “legally registered U.S. political party,” which is trademarked, also stands for an eventual one world government. Here, all nations are welcomed to submit their application (Section 9i – Powers of Congress) to join the new United People of the Republic of America.”

Why, you ask? Why America? Because, according to their FAQ sheet, America is the only nation that “has the power to establish laws that mandate price controls” and moderate human rights laws of other nations from which they consume goods and services.

Ideology is considered dangerous. Science is considered problematic, systemic to our greed and selfishness. In the proposed constitution, under Section 9e – Powers of Congress, copyright law would only be extended to “useful Arts” not specified; but that is the smallest detail of a much larger plan.

American states, according to the proposed constitution changes under Section 1a – The Legislature, would see state sovereignty abolished in favor of Federal governing. Instead, 50 “Divisions” would replace states – with similar boundaries and state names remaining the same unless citizens decided otherwise. In essence, the name ‘State’ would change to ‘Division’, and all state laws and rights would disappear.

There is also the troubling “consensus of unanimity,” where Congress would struggle to pass any law; encouraging further back-door deals. A unanimous ruling is great in theory, but is a majority rule so bad? However, on the bright side, according to Section 2e – Powers of the President; of Foreign Policy, if six months were to pass without Congressional agreement on temporary laws introduced by the president, the policy in question becomes automatic law.

On the plus side, the president would never receive a pension for their public service, and their wage is capped at twice the amount of Congress members. The president must also provide transparent reports to the people, too. However, the right is reserved for secrecy if the material is deemed to be of a sensitive nature.

But is it all Bad?

In return for the above, those who are members of the new Republic will be looked after by their new and powerful government. They will have the right to receive the Five Basic Necessities of Life (FBNL). These are:

Does it matter that a president can continually run for presidency after his 4-year term? (Section 1 – The President)

Does it matter that immigrants, although welcome in the new Republic, must carry a “Republic-issued visa, which shall include genetic identification registration, as established by Congress”? (Section 3b – Right to Citizenship and Immigration)

Does it matter that a “Armed Militia” – essentially the Army, Navy and Air Force combined – will be under the same commander as the citizen’s police? (Section 9g – Powers of Congress, Section 2a Powers of the President, Section 4e to f – Right to Protection by Law Enforcement Agencies and the Armed Forces)

Does it matter that the police will be incorporated with the surveillance agencies that plague our privacy; the NSA, CIA, FBI, Homeland Security, establishing One Federal Law Enforcement Agency? (Sections 9h – Powers of Congress, Section 4b – Right to Protection by Law Enforcement Agencies and the Armed Forces)

Does it matter that ALL citizens who aren’t Militia, police or Congress approved will lose their rights to bear arms?

What about state sovereignty? We don’t need that either, or do we?

The sell isn’t so bad; they promise in Section 2b – Right to the Basic (Physical and Emotional) Necessities of Life, to wipe out all previously incurred debt from “obtaining basic necessities.”

You Said “No Rights to Bear Arms…”

You can see the enlightened approach to this. If citizens’ don’t have firearms, then there would be less violence, right? This is the argument for the amendment – the same argument we’re having today. There is no simple answer.

According to the proposed constitution (Section 5 – Right to Bear Arms) “No person shall have the right to bear arms.” It is “strictly prohibited,” except for the Militia and law enforcement.

Who is this Political Party?

The board of directors of this so-called “leaderless” party holds their spokesman in high regard. Historically, Christopher Nemelka started on his path in 1987. “Nemelka was working as a Security Officer for the Church of Jesus Christ of Latter-day Saints (LDS/Mormon Church)” when he was asked to join a group who were exploring society in a historical and cultural context – wanting to “change the social injustices of the world.”

By 1992, Nemelka left the group, attempting social change on his own. However, in 2004, the group contacted Nemelka again, asking for his help with “Phase One.”

According to the blog, “This first attempt was aimed at creating cognitive dissonance in the religious mind, to such an extent that the free will of the person would voluntarily leave religion and emotionally change into a person more conducive to humane behavior.  This first phase became known as the Marvelous Work and a Wonder® (MWAW). The MWAW was and is successful at liberating many, many people from religion.”

In 2005, they evolved into Widow’s Mite Foundation, then into the Worldwide United Foundation, and eventually the Humanity Party®.

Donning a Masonic like uniform with a Masonic type emblem on their latest YouTube clip, they also go under the banner Anonymous. You Say What? Anonymous? Get Out of Here!

The Humanity Party (THumP) considers themselves the “hackers” of people’s brains. Aggressive spokesman Christopher Nemelka, in one interview on the Party’s blog, proudly criticizes those against his agenda – saying that “those who fight against us are the less-intelligent Anons who gain their personal self-worth and value from being involved.”

According to Nemelka, Anons who have said otherwise on the Internet now face lawsuits for slander. “Exposed what? Lies? Misinformation? Gossip and conspiracy? Nothing they have exposed is truth. We are preparing a Federal Law suit to legally counter their defamation and slander,” he states.

One wonders if he believes the Humanity Party’s proposed constitution has been enacted. Section 6 – Right to Personal Information Privacy dictates that the media and others cannot publish any personal information anywhere, without the express permission of the subject in question.

I’ll leave you with their closing statement on their blog:

“What is needed is for the ninety-nine to appoint one to represent them, who becomes the “Anointed One” and possesses the power and knowledge to represent all equally.  This chosen one must possess the gentle nature of a lamb to assure equality and fairness to all, even to the 1%, but brandish a sword from which none are immune from the strength of its blow.

This “Anointed One” is truth and justice for all equally.

This “Anointed One” is the Humanity Party®.

THumP® has the solutions.  No one else does.”

Doesn’t sound very Anonymous to me. But what would I know? I’m just another dumb Anon…are you?

This article ([Investigative]Political Party Claiming to be Anonymous Wants to Ban Guns, Ban States’ Sovereignty, Incorporate Spy Agencies with Police) is a free and open source. You have permission to republish this article under a Creative Commons license with attribution to the author AnonWatcher and AnonHQ.com.