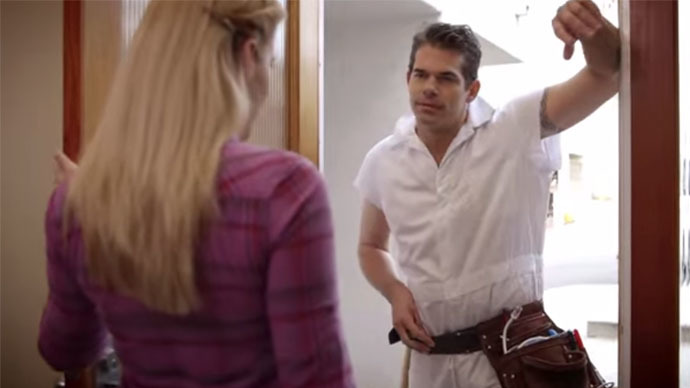 The video opens with a woman waiting to get her broadband installed by a sexy guy in a jumpsuit, tattoos and tool belt who tells her, “I’m here to install your broadband.” However, the service technician is quickly brushed aside by a group of bureaucrats in business suits from the ‘Department of the Internet’ who want to make sure her “service meets our monitoring requirements.” The mock officials proceed to document all the woman’s online habits from the type of webcam she uses to how much video and music she streams, even asking, “Does this [toaster] connect to the internet?” They give the confused heroine a telephone-book-size series of documents to sign, with the video closing with the warning “KEEP THE INTERNET OPEN AND FREE.”


The chairman of the United States Federal Communications Commission has unveiled his plans concerning the future of net neutrality and promised “there would be no rate regulation, no tariffs, no last-mile unbundling” involved. After months of discussion, FCC Chairman Tom Wheeler said in an open letter on Wednesday that he’s presenting his colleagues with a proposal this week that, if approved by a vote, will bring changes to the way web traffic is governed.

Wheeler says he’s asking the FCC to accept a proposal that would let data delivered over broadband internet be regulated under Title II of the Communications Act, similar to how traditional telecommunications are governed already under law.

“To preserve incentives for broadband operators to invest in their networks, my proposal will modernize Title II, tailoring it for the 21st century, in order to provide returns necessary to construct competitive networks,” wrote Wheeler, adding “there will be no rate regulation, no tariffs, no last-mile unbundling” if his plan is approved. “Over the last 21 years, the wireless industry has invested almost $300 billion under similar rules, proving that modernized Title II regulation can encourage investment and competition,” he added.

US President Barack Obama is among the advocates who, ahead of Wednesday’s announcement, urged Wheeler to embrace a plan that evokes Title II to protect net neutrality, a concept that calls for all internet traffic to be treated equally.

“I believe the FCC should reclassify consumer broadband service under Title II of the Telecommunications Act — while at the same time forbearing from rate regulation and other provisions less relevant to broadband services,” the president said in November. On Monday, the vice president of federal regulatory for telecom giant AT&T said the company could pursue a lawsuit if plans similar to Wheeler’s were approved since the internet is an “information service.” It was reported last month that the FCC was likely to heed the president’s recommendation, much to the chagrin of certain industry players.

“When the FCC has to defend reclassification before an appellate court, it will have to grapple with these and other arguments,” AT&T’s Hank Hultquist wrote.

According to the Wall Street Journal, Wheeler’s plan “would also give the FCC the authority to regulate deals on the back-end portion of the internet, where broadband providers such as Comcast Corp. and Verizon Communications Inc. pick up traffic from big content companies such as Netflix Inc. and network middlemen like Level 3 Communications Inc.”

Opponents of proposals that would have called for weaker net neutrality rules feared such guidelines would let Internet Service Providers give preferential treatment to content depending on the price its creator pays to have it delivered over the web to customers. Verizon and Comcast declined to immediately offer the Journal comment upon publication of Wheeler’s remarks.

Using his authority as FCC chairman, Wheeler wrote in the letter, published first by Wired, that he’s “submitting to my colleagues the strongest open internet protections ever proposed by the FCC.”

“These enforceable, bright-line rules will ban paid prioritization, and the blocking and throttling of lawful content and services. I propose to fully apply—for the first time ever—those bright-line rules to mobile broadband. My proposal assures the rights of internet users to go where they want, when they want, and the rights of innovators to introduce new products without asking anyone’s permission,” Wheeler wrote.

Fight for the Future, an activist group that has coordinated national demonstrations in support of net neutrality, wrote on Twitter that obtaining Title II protect “was considered a pipe dream” when protests were first organized advocating it.

“When you read articles today that say ‘Pres Obama’s plan for the net’ don’t buy it. This victory was fought & won by activists & web users,” the group said.

Protect Internet Freedom, the group that uploaded the video to YouTube, argue that the Obama Administration’s plans to put the internet under government control by classifying the internet a public utility would take power away from the consumer, website developers and small business owners. They say such a move would drive up costs and slow down innovation.

The group’s statements have sparked media allegations it has ties with the Tea Party or is run by certain Republicans, but the person running the website has denied they are pursuing any party’s agenda.

The Republican plan wouldn’t reclassify the internet as a utility under the law and would limit broadband suppliers from being able to discriminate against what content could be delivered to consumers for payment. Their plan would make the FCC only able to regulate against discrimination in service rather than allow it to regulate it as a utility. Republicans are also against net neutrality rules, which would require internet service providers (ISPs) to treat all internet traffic equally.

On Wednesday this week, FCC chairman, Tom Wheeler, unveiled his plans to ask the FCC to accept a proposal that would let data delivered over broadband internet be regulated under Title II of the Communications Act, which will regulate the internet as a utility, and ban fast lanes. Internet users have been pressing for broadband service to be treated like a utility, and for web traffic to remain on somewhat equal footing, disallowing ISPs to prioritize certain content. The FCC has been working for nearly a year on new rules governing how Internet Service Providers (ISPs) manage web traffic on their networks. Cable service companies don’t want more regulations or reclassification. The FCC is set to vote on the regulations on February 26.

Two cities – Chattanooga, Tennessee and Wilson, North Carolina – have petitioned FCC regulators to allow them to build and operate their own internet service. Supporters argue the proposal would allow municipalities to create competition for large internet providers like Comcast, Verizon, and AT&T. The vote is controversial but has support from the Obama administration, and proponents say it would give the public more options and faster service. Many Republicans and opponents argue that permitting such behavior exceeds the FCC’s authority.

Other opponents argue that municipal broadband would be too costly for taxpayers. However, the suggestion has sparked opposition because a federal agency generally cannot overturn state laws, and there are 20 states which ban municipal broadband projects. In Provo, Utah, millions were spent on providing broadband before the project was abandoned and sold to Google for its Fiber service. An FCC official said regulators would vote on the petitions at their monthly meeting in February, according to the Washington Post.

Internet providers argue that they invested billions of dollars in broadband infrastructure, and that government-owned networks would chill private-sector investment. They argue that this measure could increase competition and potentially compel the large cable and telephone companies which provide the bulk of the nation’s internet to improve their services. Supporters, meanwhile, point to a provision in the Telecommunications Act that gives the FCC the authority to “support the deployment” of broadband competition. Wading into the debate this week was President Obama, who said, “Today high speed-broadband is not a luxury, it’s a necessity.”

“In too many places across America, some big companies are doing everything they can to keep out competitors. Ten of millions of Americans have only one choice for the next-generation broadband. So, they’re pretty much at the whim of whatever internet provider is around.”

On Wednesday, FCC Chairman Tom Wheeler said he was “preparing to respond to complaints” from Chattanooga and Wilson, but didn’t offer a specific timeline. A White House report says that while 94 percent of Americans living in urban areas can purchase an internet connection of 25 megabits per second, only 51 percent of Americans in rural areas have access to such speeds.