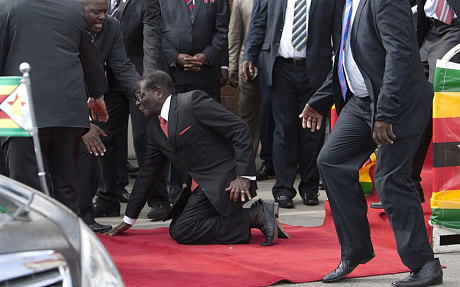 The Zimbabwean president, Robert Mugabe is reported to have fallen down after addressing supporters of his Zimbabwean African National Union-Patriotic Front (ZANU-PF) after returning from the just ended African Union submit.

The 90-year-old President who will turn 91 later this month was returning from the African Union Submit and decided to make a short speech to his supporters at the Harare International Airport before going to the Presidential Palace. President Mugabe was elected chairman of the 54-nation African Union summit of African leaders on January 30 in Addis Ababa, Ethiopia.

According local reporters who were at the scene, Mr. Mugabe had finished addressing the crowd who came to the airport to welcome him back home as the new chairman of the African Union. As he walked off the podium where he stood for the address; he tumbled to his knees and fell helplessly to the ground.

His security team quickly rushed to his aid and helped him on his feet. They then put him in a waiting car which sped off from the scene to avoid further embarrassment from the press.

Reporters who had taken shot of the incident were ordered immediately by security officials to delete the shots or get arrested. Some journalists we quickly rounded up and had their camera taken from them but others got away with it and soon, social media were bombarded with the helpless Mugabe on the ground.

The pictures were also picked up by news agencies worldwide and soon the image turned into memes and shared on social media using the hashtag #MugabeFalls. People across the African continent expressed their opinion on the incident. Whereas some say he is weak and should step down, others believe he is still strong enough to lead Zimbabwe.

Mr. Mugabe in December last year sacked his vice president, Joyce Mujuru and 7 other ministers of state, accusing them of plotting to kill him. But political commentators in Zimbabwe say he is preparing his wife, Grace Mugabe to the presidency due to his old age and that his allegations are false.

Zimbabwe was one of the richest nations in Africa but things changed dramatically when the Mugabe government began seizing white-owned farms and distributing it to blacks in 2000. Zimbabwe had a white elite minority before the country gained independence from British colonial rule in 1980.

Human rights groups have criticized Mr. Mugabe of using widespread violence to win several disputed elections. The country suffered hyperinflation until it abandoned its currency for the US dollar in 2009.

The European Union (EU) in 2002 imposed sanctions on Zimbabwe over abuses linked to national elections by the ZANU-PF. It banned Mugabe and his inner circles from traveling to Europe, freezing the assets of dozens of officials and business representatives in the country.

The measures have been gradually lifted in recent years to encourage reform but Mugabe and his wife remain on the EU’S blacklist.

Robert Mugabe was one of the rebels who resisted white minority rule in the former Rhodesia. He has ruled Zimbabwe for the past 34 years.