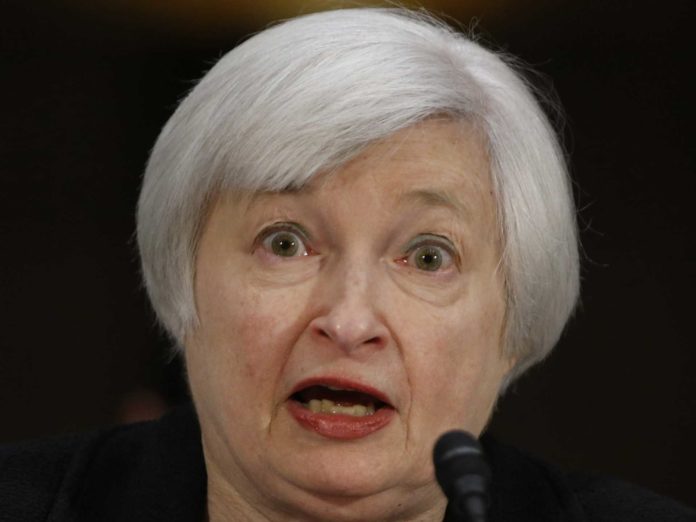 This is what happens when you ask the Federal Reserve a few difficult questions… you know, questions that they didn’t get to see hours before the press conference, questions that actually get at the heart of their “policy” and that matter to the people.

Pedro Da Costa was one of the more outspoken journalists who covered the fed. He soon found himself out of a job when he asked a series of tough questions to Yellen, who was plainly barely able to respond with the usual meaningless blathering politician-speak. Specifically, he was asking questions about the recent leak of top-secret fed information to Medley Global — such a leak would have given insider information which people at Medley Global and their customers could trade on and profit from — at the expense of everyone else. Miss Yellen’s meetings with Medley Global have come under greater scrutiny as a result. Here’s the complete video and the transcript of that fateful incident:

PEDRO DA COSTA: Pedro da Costa with Dow Jones Newswires. I guess I have two follow-ups, one with regard to Craig’s question. So, before the IG’s investigation, according to Republican Congressman Hensarling’s letter to your office, he says that, “It is my understanding that although the Federal Reserve’s General Counsel was initially involved in this investigation, the inquiry was dropped at the request of several members of the FOMC.” Now, that predates the IG. I want to know if you could tell us who are these members of the FOMC who struck down this investigation? And doesn’t not revealing these facts kind of go directly against the sort of transparency and accountability that you’re trying to bring to the central bank?

CHAIR YELLEN: That is an allegation that I don’t believe has any basis in fact. I’m not going to go into the details, but I don’t know where that piece of information could possibly have come from.

PEDRO DA COSTA: If I could follow up on his question… I think when you get asked about financial crimes and the public hears you talk about compliance, you get a sense that there’s not enough enforcement involved in these actions, and that it’s merely a case of kind of trying to achieve settlements after the fact. Is there a sense in the regulatory community that financial crimes need to be punished sort of more forcefully in order for them to be—for there to be an actual deterrent against unethical behavior?

CHAIR YELLEN: So, the—you’re talking about within banking organizations? So, the focus of regulators—the banking regulators—is safety and soundness, and what we want to see is changes made as rapidly as possible that will eliminate practices that are unsafe and unsound.

We can’t—only the Justice Department can bring criminal action, and they have taken up cases where they think that that’s appropriate. In some situations, when we are able to identify individuals who were responsible for misdeeds, we can put in place prohibitions that bar them from participating in banking, and we have done so and will continue to do so.

The video of the questions and her response:

Soon after the pleasant exchange, the Justice Department did indeed launch a criminal probe into the leaks. Pedro also stated that he had not been invited to the next FOMC Press Conference, and no other journalist since had dared ask Yellen about the leak or any hard questions that had not been previously pre-approved… to top it off, Pedro has since lost his job at the Wall Street Journal. Do you need any other proof that the mainstream media is controlled?

This Article (PROOF That The Mainstream Media Is Being Controlled) is free and open source. You have permission to republish this article under a Creative Commons license with attribution to the author and AnonHQ.com.