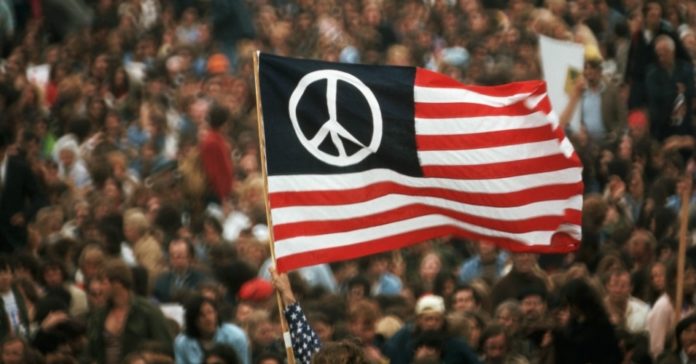 Clinical psychologist and author, Bruce E. Levine, has compiled an in depth list of reasons why young Americans don’t fight for their rights. His article has, of course, caused a little controversy. One journalist went as far as claiming Levine believes youthful resistance should focus on his own agenda, however it would seem most agree with Levine’s analysis, and even the skeptics admit the article is worth reading for the points listed and consideration.

According to Levine, young people have traditionally energized democratic movements, yet these efforts have been diminishing due to the ruling elite having created societal institutions that subdue young Americans, and break their spirit of resistance to domination. Young Americans—more so than older Americans—have basically resigned themselves to the idea that corporatocracy (a term used to describe an economic and political system that is controlled by corporations or corporate interests) can completely screw them over, and they feel helpless to do anything about it. In a 2010 Gallup poll, Americans were asked, “Do you think the Social Security system will be able to pay you a benefit when you retire?” 76% of 18 to 34-year-olds said ‘no’. Despite the fact that these individuals don’t believe they’ll receive their social security benefits, few have demanded it be shored up by fairly taxing the wealthy. They accept that they will have more money deducted for social security even though they don’t believe they’ll one day receive those benefits.

1. Student-Loan Debt. During the 1970’s, tuition at many U.S. public universities was affordable. It was possible to receive a bachelor’s degree having accumulated no debt. Those days are dead and over. Large student debt, and the fear it creates, has become a pacifying force. Today, two-thirds of graduating seniors at four-year colleges are in debt, and that includes over 62 percent of public university graduates.

These debts come at a time in one’s life when it should be easy to resist authority because one does not yet have family responsibilities. Instead, young people are burdened with the stress of the cost of buckling authority, losing their job, and being unable to pay an ever-increasing debt. This has resulted in a vicious cycle where student debt has a subduing effect on activism, and political passivity makes it more likely students will accept their debt as a natural part of life.

2. Psychopathologizing and Medicating Noncompliance.Erich Fromm, who was a widely respected anti-authoritarian leftist psychoanalyst, wrote in 1955, “Today the function of psychiatry, psychology and psychoanalysis threatens to become the tool in the manipulation of man.” Fromm died in 1980, which happened to be the same year Ronald Reagan was elected president, and an increasingly authoritarian American Psychiatric Association added to their diagnostic bible (then the DSM-III) disruptive mental disorders for children and teenagers such as “oppositional defiant disorder”, or ODD.

“Symptoms” of ODD include; often actively defies or refuses to comply with adult requests or rules, often argues with adults, and often deliberately does things to annoy other people. That pretty much describes the majority of all children. Those who are actually diagnosed with ODD receive heavily tranquilizing antipsychotic drugs, such as Zyprexa and Risperdal, which are now the highest grossing class of medication in the U.S. ($16 billion in 2010). According to the Journal of the American Medical Association in 2010, many children who supposedly have ODD are being given antipsychotic drugs when they have a nonpsychotic diagnoses.

3. Schools That Educate for Compliance and Not for Democracy. John Taylor Gatto, after receiving the New York City Teacher of the Year Award on January 31, 1990, upset many who were in attendance at the ceremony by stating, “The truth is that schools don’t really teach anything except how to obey orders. This is a great mystery to me because thousands of humane, caring people work in schools as teachers and aides and administrators, but the abstract logic of the institution overwhelms their individual contributions.”

Regardless of the subject matter, the main objective in most classrooms is to socialize students to be passive and directed by others, to follow orders, to take seriously the rewards and punishments of authorities, to pretend to care about things they don’t care about, and that they are impotent to affect their situation. School teaches us that politely asserting our concerns is “moral and mature”. It demands our compliance and teaches us not to act in a friction-causing manner.

4. “No Child Left Behind” and “Race to the Top.”Thanks to corporatocracy, our already authoritarian school system has become even more authoritarian. Educational policies such as “No Child Left Behind”, and “Race to the Top”, have essentially standardized-testing tyranny that creates fear. This is contradictory to education for a democratic society. Fear forces students and teachers to constantly focus on the demands of test creators. In doing so, it crushes curiosity, critical thinking, questioning authority, and challenging and resisting illegitimate authority. Were our school system actually democratic and less authoritarian, one would evaluate the effectiveness of a teacher not by corporatocracy-sanctioned standardized tests, but by asking students, parents, and communities if a teacher is inspiring students to be more curious, to read more, to learn independently, to enjoy thinking critically, to question authorities, and to challenge illegitimate authorities.

5. Shaming Young People Who Take Education—But Not Their Schooling—Seriously. Today society has been led to believe that disliking school means disliking education in general. Many Americans are under the delusion that if you lack a college degree, you are a “loser”. In actuality, this is not the case. Gore Vidal and George Carlin, two of America’s most astute and articulate critics of the corporatocracy, never went to college. Carlin himself dropped out of school in the ninth grade. You don’t need a degree to have a voice or an opinion, and you don’t need to attend a school to read a book. Throughout history we have seen many examples of those deemed “the common man” fighting for what they believe in without schooling, and succeeding in their endeavors.

6. The Normalization of Surveillance.We are living in an era of surveillance, and in the case of our nation’s youths, they’re being born into it. The National Security Agency (NSA) has been in the world’s spotlight for monitoring American citizen’s email and phone conversations, while at the same time employer surveillance has become increasingly common as well. Young Americans are starting to accept corporatocracy surveillance because it’s become routine in their lives. From a young age people are being heavily monitored. Parents scan websites and browsing history, and like employers, they monitor their children’s Facebook pages. Some parents use the GPS in their children’s cell phones to track their whereabouts, and other people go as far as placing cameras throughout their house. Many children and teenagers have lost their confidence due to the fact they are constantly being watched. How can young Americans be expected to pull off a democratic movement below the radar of authorities when, as youths, they didn’t even have the confidence to throw a house-party when their parents were out of town?

7. Television. In our current age of technology, American children now have access not only to televisions and computers, but to cell phones, iPods, and other technologies capable of accessing the media. On average, children spend around 8 hours a day on such devices. Many progressives are concerned about the concentrated control of content by the corporate media, but the primary issue is the fact that television itself has become a pacifying agent. For example, private-enterprise prisons have recognized that providing inmates with cable television can be a more economical method to keep them quiet and subdued than it would be to hire more guards.

Fear-based television works beautifully in an authoritarian society to keep people afraid and distrustful of one another. It isolates people from one another to prevent them from joining together to create resistance to authorities. Regardless of the programing, watching television also slows down brainwaves making critical thinking difficult. Although playing video games isn’t as mind-numbing as simply viewing television, such games have become the only real form of potency boys and young men experience, and “virtual potency” is no threat to the ruling elite.

Fundamentalist consumerism destroys self-reliance. It creates people who feel completely dependent on others and who are thus more likely to turn over decision-making power to authorities. This is the precise mind-set the ruling elite is striving for. A fundamentalist consumer culture legitimizes advertising, propaganda, and all kinds of manipulations, including lies. Once society legitimizes the lies and manipulation, people cease to trust one another and form democratic movements.

In conclusion, Levine states that these are not the only aspects of our culture that subdue young Americans and crush their resistance to domination. The food-industry has helped to create an epidemic of childhood obesity, depression, and passivity, and the prison-industrial complex serves to keep young anti-authoritarians “in line”.

As Ralph Waldo Emerson observed, “All our things are right and wrong together. The wave of evil washes all our institutions alike.”