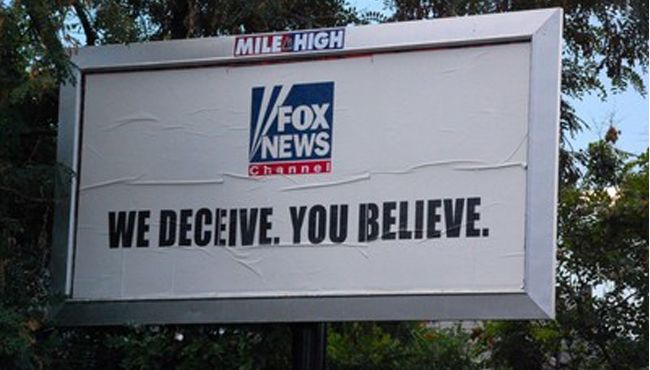 PunditFact, a project of the Tampa Bay Times and the Poynter Institute, has released an analysis that reveals that out of all statements made by Fox hosts or guests, over half are completely false. In addition, only about 8 percent of the statements made could be considered “completely true”.

Many are already aware that the mainstream media cannot be trusted, and Fox most often tops the list, with its ridiculous reporting. Universities have released studies that show Fox viewers are not only the least informed of all news viewers, but they actually know less than those who don’t watch news at all. This is due to all of the false information that is notoriously spread on the network.

And yet, as many of us pay no more attention to Fox than we would a convenient store tabloid (“Bat-Boy Found in Cave!”), it remains one of the most watched opinion networks on television. This is due to programs such as “The O’Reilly Factor” and “The Kelly File”. Due to the content Fox shares, this should be concerning.

As shown above, most Fox statements range between “Mostly False”, and “Pants on Fire”, however, Fox isn’t the only network that just says what it pleases. Below is a chart showing how MSNBC/NBC fared:

CNN actually scored the highest out of the three, with 40% “Mostly True”:

“The comparisons are interesting, but be cautious about using them to draw broad conclusions. We use our news judgment to pick the facts we’re going to check, so we certainly don’t fact-check everything. And we don’t fact-check the five network groups evenly. CBS, for instance, doesn’t have a cable network equivalent, so we haven’t fact-checked pundits and CBS personalities as much.”

Of all mainstream media news outlets, it was reported that the NPR audience was most informed. Those at True Activist suggest news viewers should question everything, look for the truth in all situations, and if watching Fox News, it is suggested that you should change the channel.