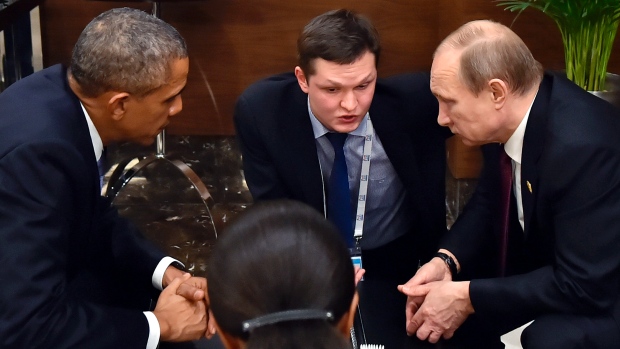 Russian President Vladimir Putin claims that the ISIS terrorists are receiving funding from at least 40 countries, including G-20 members. After the just-concluded G-20 meet in Turkey, Putin told reporters that he shared Russian intelligence data on Islamic State financing with his G-20 colleagues:

“I provided examples based on our data on the financing of different Islamic State units by private individuals. This money, as we have established, comes from 40 countries and, there are some of the G20 members among them. This topic (the war on the terror) was crucial. Especially after the Paris tragedy, we all understand that the means of financing terrorism should be severed. “

Putin also spoke of the illegal trade in oil that helps the Islamic State earn huge amounts of revenue:

“I’ve shown our colleagues photos taken from space and from aircraft which clearly demonstrate the scale of the illegal trade in oil and petroleum products. The motorcade of refueling vehicles stretched for dozens of kilometers, so that from a height of 4,000 to 5,000 meters they stretch beyond the horizon.”

Claiming that the United States had changed its stance on cooperating with Russia after the Paris terror attacks, Putin said:

“We need to organize work specifically concentrated on the prevention of terrorist attacks and tackling terrorism on a global scale. We offered to cooperate (with the US) in anti-IS efforts. Unfortunately, our American partners refused. They just sent a written note and it says: ‘we reject your offer’. But life is always evolving and at a very fast pace, often teaching us lessons. And I think that now the realization that an effective fight [against terror] can only be staged together is coming to everybody.”

He also blasted the Western criticism of Russia’s actions in Syria:

“They’re afraid to inform us on the territories which we shouldn’t strike, fearing that it is precisely where we’ll strike; that we are going to cheat everybody. Apparently, their opinion of us is based on their own concept of human decency.”

In 2014, when American President Barack Obama named ISIS, Russia and Ebola the three major threats to US national security, Putin took much offence to being placed in this list – next to a terror organization and a disease. Reacting strongly to the statement, he told a US journalist:

“Well who on earth armed them? Who armed the Syrians who were fighting with Assad? Who created the necessary political climate that facilitated this situation? Who pushed for the delivery of arms to the region? Do you really not understand who is fighting in Syria? They are mercenaries, mostly. Do you understand they are paid money? Mercenaries fight for whichever side pays more. So you support them, arm them and tomorrow they join ISIS… Do you think the USA doesn’t know who is buying the oil? Is it not their allies that are buying oil from ISIS? “

Though the video was filmed at the Valdai International Discussion Club in late 2014 and went viral earlier this month, it is again making the rounds in the aftermath of the Paris attacks and after the United States had a change of heart and sent its warplanes to attack hundreds of trucks – for the first time – that ISIS has been using to smuggle the crude oil it has been producing in Syria. FYI, the Islamic State makes an estimated $50 million a month from selling crude from captured oilfields in Iraq and Syria.

This Article (Putin Exposes 40 Countries That Finance ISIS) is free and open source. You have permission to republish this article under a Creative Commons license with attribution to the author and AnonHQ.com.