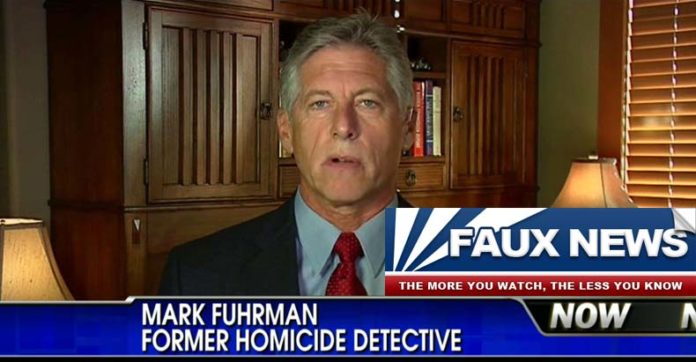 Faux News has a knack at choosing the very worst of humanity as its guests. I’m not kidding, we recently saw a story where one such “distinguished” “terrorism” “expert” was arrested, facing what is in effect a life sentence worth of charges for fraud.

When a viral video turned up that showed a police officer assaulting a 16-year-old female student, seen below,  you would think that Fox wouldn’t be able to dredge up a low-life “guest” willing to justify the horrific incident.

Sean Hannity turned to his trusty “expert” on police conduct: Mark Fuhrman. Fuhrman is a disgraced former LAPD homicide detective, a convicted perjurer, and a documented bigot- as shall be explained later.

Apparently when someone refuses to do something, you’re justified when you practically attempt to murder a woman.

“Soft control”  means flipping a girl onto the ground, and then dragging her several feet, causing her to be hospitalized for her injuries. Apparently anything short of death is “soft control” to this guy. Nowhere is the poor girl seen escalating anything.

Fuhrman’s perspective is perfectly explained by a tape-recorded conversation between film producer Laura Hart McKinny and himself thirty years earlier:

“This job is not rules. This is a feeling. F— the rules; we’ll make them up later.”

He would later badmouth his own partner, a more idealistic cop who did not want to lie, and believed that the police were bound by the same rules as the rest of us:

Fuhrman believed that lying was a necessity in his job; an example that truly highlights this is his behavior as the key investigator of the OJ Simpson murder trial.

Suspected of planting evidence at the crime scene, Fuhrman denied four times under oath that he had used vulgar racist language to characterize blacks in the past decade.

When his recorded conversations with Laura Hart McKinny were played for the court, it was plain for everyone to hear that he had lied. Indeed, he had made numerous racist and derogatory comments towards blacks and Mexicans. He also spoke ill of women, and openly admitted to routinely using abusive force as a patrol officer.

“How do you intellectualize when you punch the hell out of a n-gger? He either deserves it or he doesn’t,” Fuhrman said. “N-gger drivin’ a Porsche that doesn’t look like he’s got a $300 suit on, you always stop him,” he stated matter-of-factly in another conversation.

In her testimony during the Simpson trial, a woman named Kathleen Bell who had met Fuhrman recounted a conversation they had had:

“when he sees a black man with a white woman driving in a car he pulls them over. I was taken aback a little bit, and so I kind of paused and … I just said, well, what if they didn’t do anything wrong? He said he’d find something.”

He clearly has a problem with blacks, and sees violence as his solution:

“Commander Ken Hickman … should be shot,” he said in a conversation with McKinny. “He wanted to be chief. So he wants the City Council and the police commissioner and all these n-ggers in L.A. city government–and all of ’em should be lined up against a wall and f—–g shot.”

He was also part of a group in the LAPD called Men Against Women, one in opposition to the acceptance of female police officers into the LAPD. Women apparently aren’t violent enough for police work:

You split up two suspects and you say: ‘Where’re you from? What’s his name?’ That’s great, but if he doesn’t tell you, you give him a shot in the stomach with your stick and say: ‘Listen boy, I’m talking to you, and you better give me some attention or I’m gonna f—— drop you like a bad habit.’ Now can you tell me a female you see doing that?”

Other words of “wisdom” from Fuhrman include:

“First thing, anything out of a ni-gger’s mouth for the first five or six sentences is a f—–g lie.”

“You do what you’re told, understand, n-gger?”

“You keep choking [the suspect] out until he tells you the truth. You know it is kind of funny. But a lot of policemen will get a kick out of it.”

Fuhrman was the investigator who discovered the “bloody glove”; his proven perjury would completely destroy the case that the prosecution was building.

If Simpson really did get away with murder, it was because a proven lying bigot who was against inter-racial marriage was the lead investigator of his case. By October, 1996, Fuhrman was indicted on felony perjury charges, in which he pleaded no contest.

“It is important to understand that, as a result of these charges, this plea and this sentence, Mark Fuhrman is now a convicted felon and will forever be branded a liar,” said California Atty. Gen. Dan Lungren, “by pleading to a felony, Mr. Fuhrman will never be a police officer in the State of California again, He is also now the ultimate impeachable witness – a convicted perjurer.”

Convicted of felony perjury, Fuhrman has become the least trustworthy source of information possible- a liar of biblical proportions,  Fox News still manages to trot him out as “a forensic and crime scene expert” and to give his verdict on use-of-force matters.

Indeed, his subsequent commentaries on Michael Brown and Freddie Gray only prove how damaging this “expert’s” opinion is on the average Fox viewer. A convicted perjurer and a convicted fraudster on the same channel… what are the odds? Seriously, stop watching Fox, stop everyone you know from watching Fox. If you must watch something, a blank TV screen would be much more informative.

This Article (Racist, Sexist, Lying Convicted Felon? FOX News Wants YOU ) is free and open source. You have permission to republish this article under a Creative Commons license with attribution to the author(CoNN) and AnonHQ.com.