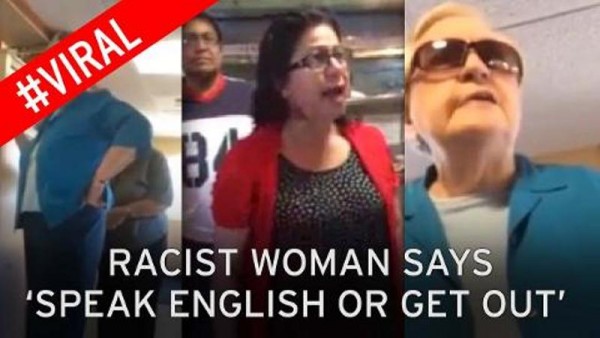 An unidentified white woman has been caught on video berating and ridiculing a customer for speaking Spanish at IHOP restaurant in downtown Los Angeles, Southern California.

The incident, which has been described as a racist rant, was captured on camera on July 31, 2015. The racist woman was also said to be waiting for a table at the restaurant when she heard Carlos Vasquez’s mother speaking Spanish.

Carlos Vasquez, who recorded the video and first posted it on Facebook, told  NBC Los Angeles that the woman started to go off on his mother, Norma Vasquez, after her mother spoke Spanish with her family while waiting to be served. According to Vasquez, the incident attracted attention and caused a confrontational situation in the restaurant. He said the clash began when the racist woman interrupted his mother without any provocation for speaking Spanish.

Carlos Vasquez and his mother are said to have migrated to the United States from El Salvador some 30 years ago and live in Highland Park.

In the video, the racist woman can be heard saying, “We speak English in America, go back to Spain. Spanish is from Spain. I’ve been to Spain, so I know.” Vasquez and his mother later told NBC Los Angeles that they were very shocked at the behavior of the woman in 21st Century America, where civilization is at its peak.

“This is Los Angeles. Even the name of the city is in Spanish. She shouldn’t be mad or interrupting families for whatever language they’re speaking.”

“Inside, I wasn’t upset. I got more upset when my mom started to cry. It wasn’t fair for my mom to cry to a stranger just because my mom was speaking Spanish,” Vasquez said.

His mother said the woman completely dehumanized her. She was quoted as saying, “I felt awful, as though I was worthless.”

Since Vasquez shared the video on his Facebook page, it has gone viral and many have re posted it on other social media platforms.

This Article (Watch How A Racist White Woman Went Crazy After Hearing Somebody Speaking Spanish In America [Video]) is free and open source. You have permission to republish this article under a Creative Commons license with attribution to the author and AnonHQ.com.