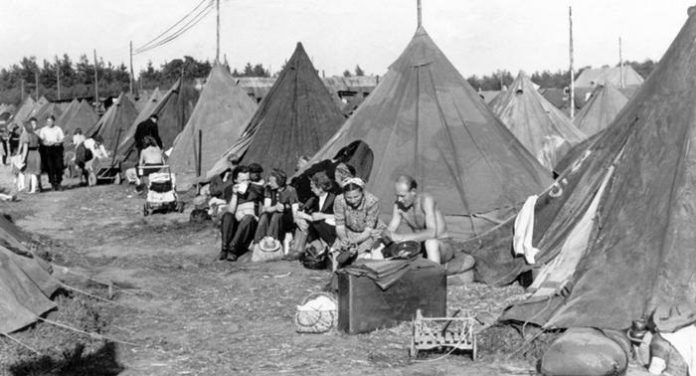 The whole world is aware that Europe is buckled under the biggest refugee crisis since World War II, with millions of people fleeing civil war and oppression in the Middle East, North Africa, and Western Asia, and landing on the continent’s shores by land and by sea. The UN estimates that more people have been displaced than at any time since the Second World War — there are close to 60 million war refugees, according to the UN High Commissioner for Refugees.

While there is no denying the fact that the current humanitarian crisis is the worst refugee crisis of our generation; with continuous comparison to World War II, it is imperative that we share a small yet important fact with you: at the height of World War II, the Middle East Relief and Refugee Administration (MERRA) operated camps in Syria, Egypt and Palestine, where tens of thousands of people from across Europe sought refuge.

Yes, you read it right. Refugees crossed the same passageways [which the Syrians, the Africans, and the Asians are taking to reach Europe TODAY] 70 years ago — BUT they were the Europeans (largely from Bulgaria, Croatia, Greece, Turkey and Yugoslavia) trying to find solace in the Middle East.

How The Refugees Entered The Camps:

According to the International Social Service records, refugees from Europe had to register at one of several camps in Egypt, Palestine and Syria and obtain camp-issued identification cards, which contained their full name, gender, marital status, passport number, and their educational and work history.

After registration, they had to undergo a refugee medical examination at makeshift hospital facilities — where they took off their clothes, their shoes and were washed until officials believed they were sufficiently disinfected. When they were declared fit enough to join the refugee camp, they were divided into living quarters for families, unaccompanied children, single men and single women.

Refugees in MERRA camps received a half portion of Army rations each day; sometimes supplemented with foods that reflected refugees’ national customs and religious practices. ‘Rich’ refugees could buy beans, olives, oil, fruit, tea, coffee and other staples from camp canteens. On the rare occasion, during supervised visits to local shops, they could buy soap, razor blades, pencils, paper, stamps and other items. Some camps provided space for refugees to prepare meals; one camp in Aleppo reserved a room for women so they could make macaroni with flour, which they received from camp officials.

How They Found Work & Developed Skills:

Some, but not all, camps required refugees to work — though they were not forced to earn to make ends meet. GlobalPost reports:

In Aleppo, refugees were encouraged, but not required, to work as cooks, cleaners and cobblers. Labor wasn’t mandatory in Nuseirat, either, but camp officials did try to create opportunities for refugees to use their skills in carpentry, painting, shoe making and wool spinning so that they could stay occupied and earn a little income from other refugees who could afford their services. At Moses Wells, all able-bodied, physically fit refugees worked as shopkeepers, cleaners, seamstresses, apprentices, masons, carpenters or plumbers, while “exceptionally qualified persons” served as school masters or labor foremen. Women performed additional domestic work like sewing, laundry, and preparing food on top of any other work they had.

How They Acquired Knowledge:

How They Entertained Themselves:

How They Prepared For A Brighter Future:

Education was a crucial part of camp routines. GlobalPost writes:

Classrooms in Middle Eastern refugee camps had too few teachers and too many students, inadequate supplies and suffered from overcrowding. Yet not all the camps were so hard pressed. In Nuseirat, for example, a refugee who was an artist completed many paintings and posted them all over the walls of a kindergarten inside the camp, making the classrooms “bright and cheerful.” Well-to-do people in the area donated toys, games, and dolls to the kindergarten, causing a camp official to remark that it “compared favorably with many in the United States.”

This article (Rare Photos: European Refugee Camps in Syria — At The Height of World War II) is a free and open source. You have permission to republish this article under a Creative Commons license with attribution to the author and AnonHQ.com.