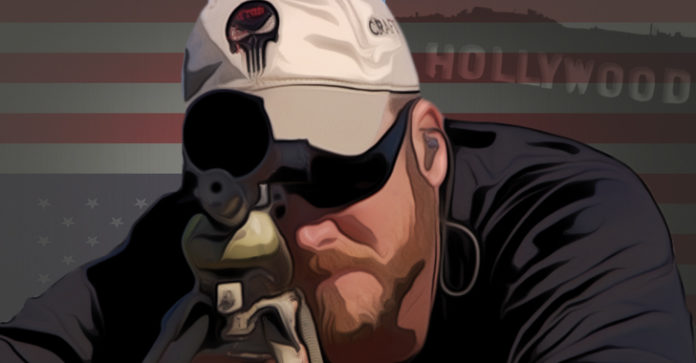 Written by: SM Gibson at theantimedia.org

The following words are not meant to spit on the grave of Chris Kyle, but rather address a reality that may be unpleasant for many to hear. Chris Kyle was not a hero. He did not protect America or keep it safe. He killed a lot. He also, apparently, lied a lot as well. Sometimes truth lies beyond the lens of star-spangled glasses and once you have the courage to look beyond a constructed work of fiction, you may realize that the facts do not align with your belief system. It may not be easy, but sometimes the truth is harsh. If we, as a people are genuinely in pursuit of truth and the justice that follows, we must distance ourselves from the warm feelings that certain narratives provide and search objectively without the blinders that provide us comfort.

Kyle’s story takes place in Iraq, his weapon and astute aim followed along with him. The former Navy SEAL and bronco rider was responsible for 160 confirmed deaths – 255 if you include unconfirmed kills – while he was stationed in the land that was once ancient Babylon. How can it be said that a single person he killed was on behalf of protecting the American way of life or its freedoms when Iraq nor its people were ever a threat to either? Kyle was a member of an invading force. To protect someone or something, an outside threat must first be made, otherwise what is labeled as protector is actually an aggressor.

No matter your thoughts surrounding the events on 9/11, one thing that is for certain is that Iraq was not involved. Saddam Hussein never attacked the United States, nor did it appear that he ever had plans to do so. Hussein’s regime, although not innocent of crimes in its own country, was not a threat to the United States or its citizens. And despite the Bush administration’s assertion that Iraq had weapons of mass destruction, they didn’t.

It may be brutal to hear, but the facts dictate that none of the people that Chris Kyle killed were a threat to America, its freedoms, or its way of life.

So who or what was the Texan protecting?

It can be said that Kyle was protecting lives by making the argument that he was providing cover for his fellow soldiers; soldiers that should have never been in harm’s way to begin with. The cover provided to US soldiers should have come in the form of not sending them into a country that posed zero threat to the United States. If the US government actually cared about protecting its citizens, instead of providing snipers to serve as their protectors, it should have shielded them by not sending them onto a battlefield constructed of lies. Thousands of Americans who were sent back to their families with a flag draped over their maimed and lifeless bodies would still be alive today if not for the actions and needless meddling of the US government. While it is very true that Chief Kyle was not to blame for the foreign policy of his employer, he was a cog in its wheel, and more importantly he took pleasure in his duty of senseless death.

American Sniper, the movie based on his words, makes Kyle appear as if he was conflicted by the scores who were killed by his marksmanship. Unfortunately for his legacy, his actual words tell a different story.

“I wondered, how would I feel about killing someone? Now I know. It’s no big deal”

Another quote from Kyle’s book describes his thoughts on the Iraqi people,

“Savage, despicable evil. That’s what we were fighting in Iraq. That’s why a lot of people, myself included, called the enemy ‘savages’…. I only wish I had killed more.”

The sniper also described his chosen profession of killing by saying,

“You do it until there’s no one left to kill. That’s what war is. I loved what I did… I’m not lying or exaggerating to say it was fun.”

Kyle also relays his lack of regret by saying,

“There’s another question people ask a lot: Did it bother you killing so many people in Iraq? I tell them ‘No.’ And I mean it.”

As far as the moral ambiguity that he dealt with, Kyle said

“I have a strong sense of justice. It’s pretty much black-and-white. I don’t see too much gray.”

The last passage from American Sniper that I will list truly demonstrates Kyle’s lack of heroism:

“A teenager, I’d guess about fifteen, sixteen, appeared on the street and squared up with an AK-47 to fire at them. I dropped him. A minute or two later, an Iraqi woman came running up, saw him on the ground, and tore off her clothes. She was obviously his mother. I’d see the families of the insurgents display their grief, tear off clothes, even rub the blood on themselves. If you loved them, I thought, you should have kept them away from the war. You should have kept them from joining the insurgency.”

The insurgency that the sniper is referring to is the local Iraqi insurgency that would have never existed if the United States hadn’t invaded Iraq to begin with. These “insurgents” weren’t making their way overseas to hurt Kyle’s family, so where does his malice towards the child he killed in cold blood come from?

Maybe you’ll choose not to trust that Kyle really believed the words he wrote in his own book, I couldn’t blame you, after all Kyle was caught in multiple lies while he was still alive.

Regardless of whether you approve of Jesse Ventura famously pursuing his lawsuit against Kyle after his death, Ventura did prove in court that Kyle lied about punching him at a Navy SEAL reunion in 2006. The former governor of Minnesota was awarded 1.8 million dollars for Kyle’s tall tale despite being told he would never prove in a court of law that the ghost of an American hero had lied. He did. HarperCollins, the publisher of American Sniper also had to remove the story from future printings of the book.

Another lie that Kyle was caught in was a story he told to D Magazine regarding a supposed run in with two car jackers in 2009. The incident supposedly took place at a gas station somewhere along Highway 67 just south of Dallas, Tx. Kyle claimed that he shot the two men each twice in the chest, killing them both. He never claimed that either man fired a shot at him. The former military man said that he waited on local law enforcement to arrive and once on the scene he gave them a phone number that directed the officers to the Department of Defense. The person on the other end vouched for him and he was sent on his way, according to Kyle. The problem with this story is that despite various publications having attempted to verify Kyle’s account multiple times, there is still not a single shred of evidence that it ever happened.

The real life American Sniper also told a tale about him and a comrade being ordered to New Orleans in the direct aftermath of Hurricane Katrina. The story goes that the two were stationed atop the Superdome. Kyle then proceeded to pick off and kill 30 looters dead in the streets from atop the home of the New Orleans Saints. There is absolutely no evidence to corroborate this narrative either.

Either Chris Kyle was a cold-blooded killer who took it upon himself to be judge, jury, and executioner while killing Americans dead in its streets or he was a liar. Whichever story you choose to believe, one thing is for certain, the real American Sniper was no hero.

Hollywood is a business, and as with the goal of any business, their objective is to generate profit. The movie industry does so through visual story telling. A studio produces films to make you feel a certain way which in turn allows the studios to recoup their expenses and ideally generate a profit. The story of Chris Kyle is no different.

There is nothing wrong with enjoying a film, but don’t fool yourself into thinking that the heroic Chris Kyle portrayed on the silver screen is the same as the real life Chris Kyle. One of them was payed to sway your emotions while the real one was paid to kill those that never ever threatened the rights which allow these type of films to be made in the first place.