The Syrian crisis as we know it began over a few protests, with mere hundreds of demonstrators in attendance. How has it exploded into a migrant “crisis” with dying children…. a mainstream media information war waged against Russia… a proxy war involving Russia, the US, NATO and even China now…  which is now evolving into a hot war “against” ISIS, one “accident” away from a full-blown shooting war between the uncooperative “partners”?

The US has long had its gaze on Syria, years before the civil war and the 2011 “revolution”; Wikileaks has a cable from US ambassador Williams Roebuck, who was then stationed in Syria,  discussing a plan to remove Assad from power.

The full cable can be found here. It’s worth a read.

Jullian Assange during an  RT interview:

“…That plan was to use a number of different factors to create paranoia within the Syrian government; to push it to overreact, to make it fear there’s a coup…so in theory it says ‘We have a problem with Islamic extremists crossing over the border with Iraq, and we’re taking actions against them to take this information and make the Syrian government look weak, the fact that it is dealing with Islamic extremists at all…’”

“…foster tensions between Shiites and Sunnis. In particular, to take rumors that are known to be false…or exaggerations and promote them – that Iran is trying to convert poor Sunnis, and to work with Saudi and Egypt to foster that perception in order to make it harder for Iran to have influence, and also harder for the government to have influence in the population.”

Other leaked cables reveal that the US had CIA operatives on the ground instigating the relatively small demonstrations that started it all…even starting up a propaganda satellite TV channel which broadcasts anti-government programming across the country. Called Barada TV, it is based in London, but financed by Washington.  Saudi Arabia , Turkey and Qatar had also been working on arming and financing the rebels since 2012.

Destroying the myth that Obama was anything BUT a Bush clone (and the notion that US presidents make the decisions), financial backing for Syrian opposition groups began under former US President George W. Bush, but continued under Obama.

So WHY is all this happening? The mainstream media has been keen to push the narrative that it’s because of sectarian differences, Sunni VS Shiite- which mirrors how US politicians were trying to mislead the Syrian People originally, as seen in the above cables. This narrative gets bust when one considers the fact that the vast majority of Assad’s soldiers are in fact Sunni.

You want to know the truth? You can’t han- OK OK, here it is:

This is the first time Russia and the US has been bombing the SAME country since WW2, and the reasons are largely the same when one looks beneath the rhetoric: influencing areas of strategic importance, and resources- as is the real reason for nearly every conflict. Syria just happens to be in a very strategic position.

You see, this coalition between the US, NATO, Qatar and Saudi Arabia arises just as the Iran-Iraq-Syria gas pipeline was being discussed; the pipeline would have eventually reached Europe, and allowed Europe to diversify its reserves away from Russia- reducing Russia’s influence on Europe and allowing the US to fill the void. Another pipeline to Europe ALSO depending on Syria’s cooperation was the Qatar-Turkey pipeline. 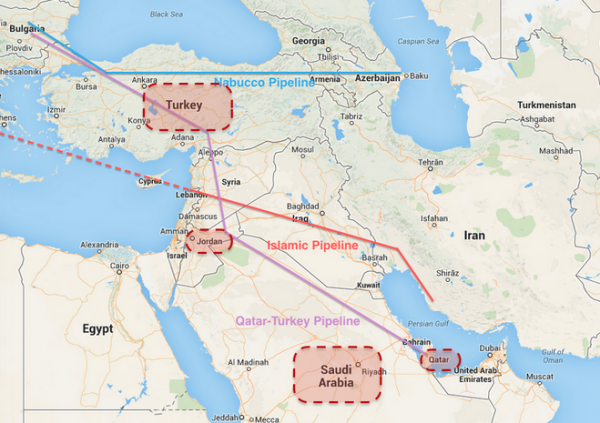 Assad refused to allow the Turkish-Qatar pipeline through his borders,  ‘to protect the interests of [his] Russian ally, which is Europe’s top supplier of natural gas.’” Turkey and Saudi Arabia get pissed, and fund “rebels” (ISIS). Putin has finally remembered this friendship, as well as his country’s monopoly on the European market, and sends jets to bomb the “rebels”…  and so the rest, as they say, is history.

( To be fair, this is probably only the short-term reason; as should be apparent by now, the long-term reason to be in Syria is to weaken the US’s chief rivals in the region (Iran, Syria itself and of course Russia) by any means necessary, though that would leave out the motivations of the smaller players (Europe, Turkey, Qatar and Saudi Arabia) who stand to benefit a great deal from supplying and receiving gas.)

As a side-note, the 2008 U.S. Army-funded RAND report, “Unfolding the Future of the Long War” describes the strategy that we see being deployed in Syria right now:

“Divide and Rule focuses on exploiting fault lines between the various Salafi-jihadist groups to turn them against each other and dissipate their energy on internal conflicts. This strategy relies heavily on covert action, information operations (IO), unconventional warfare, and support to indigenous security forces. … the United States and its local allies could use the nationalist jihadists [in Syria, AKA the “moderate” rebels] to launch proxy IO campaigns to discredit the transnational jihadists in the eyes of the local populace… U.S. leaders could also choose to capitalize on the ‘Sustained Shia-Sunni Conflict’ trajectory by taking the side of the conservative Sunni regimes against Shiite empowerment movements in the Muslim world…. possibly supporting authoritative Sunni governments against a continuingly hostile Iran.”

In essence, when applied to Syria, the strategy advocates supporting various Sunni jihadist groups in Syria so that they weaken the Syrian government. In order to keep the groups from themselves overrunning the area, simply have the “foreign” groups fight the “local” ones. All the while, support Sunni governments against Iran. We see this playing out right now as ISIS battles the “moderates” as well as Assad. We see that happening as Turkey and Saudi Arabia join the West against Iran and Syria.

This divide and conquer strategy is well-known, used most successfully by the British Empire in establishing its rule over MUCH larger nations around the world. By supplying arms (often in exchange for resources, labor and REAL goods) to multiple small factions to fight and weaken each other, the British were the only ones powerful enough left to exert their own rules on the local populace.

The entry of Russia into the conflict throws a wrench into that plan, in that it is hell-bent  on destroying ISIS. Taking out one faction in the area would allow the few remaining “moderates”, and more specifically the Assad government to strengthen- preventing other nations from exerting their “colonial” ambitions on Syria.

This Article (The REAL Reason Nearly EVERYONE Is In Syria) is free and open source. You have permission to republish this article under a Creative Commons license with attribution to the author(CoNN) and AnonHQ.com.