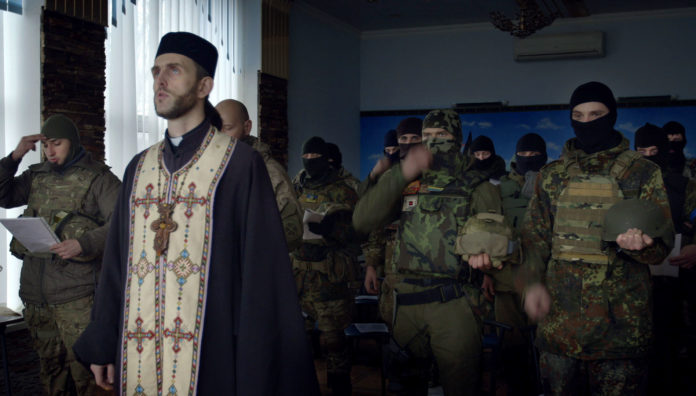 A Ukrainian, racially polish, ultra-nationalist wishes to wage a crusade against Russia. The Chechen war veteran sees an example to be had in the Taliban, and wishes to light the fire of religious zealotry in the hearts of Ukrainians; clearly blind nationalism was not working, let’s also kill the infidels because they be evil Godless women and children who wish to secede from the glorious shining city on a hill, Ukraine! Allahu Ak- I mean God is great!!! The Intercept reports that the leader of the Ukrainian ‘Bratstvo’ (Brotherhood) political organization, Dmitry Korchinsky (Dmytro Korchynsky), hopes to create a sort of Christian version of the Taliban, to wage a holy war against Russia…. What does Russia have to do with this again? The irony here is that were he to try to embrace his “brother from another mother” he’d have a few fractions of a second to realize just how hot the Taliban’s passion burns…. Literally.

Korchinsky believes his mission is to establish an original ideology that mixs messianic Christianity and jihadist Islam, citing the examples of Hezbollah, the Taliban and Al-Qaeda. You’ve both fascistic ultranationalists AND religious extremists there now… If Hitler had a baby with the antichrist, the result would probably be similar.

Loading...
He wants to change the regional conflict in eastern Ukraine…. into a crazed jihad against Russia, seeing it as the only option to defeat the bigger and stronger neighbor…. Seriously, if the Taliban were in Mexico or Canada, there’d literally be no such countries of that name just a few days later. Think about it.

Korchinsky is also a commander of the St. Mary’s Battalion, one of many privately-funded paramilitary units (aka mercenaries) fighting rebel groups in eastern Ukraine alongside Kiev’s troops and the National Guards.

The volunteers that come to Bratstvo recruitment point in the capital, Kiev, to join the St. Mary’s Battalion are usually young people between 18 and 25 years old (aka, idealistic and easily manipulated). Only a few of them have served in the army and know how to handle a gun (aka canon-fodder). They then receive just a few weeks of military training. Then it was off to the races!

There is a lot of evidence that many of the volunteer battalions follow Nazi ideology, from the Nazi salutes to the blatant HH’s. According to Korchinsky himself, his men differ in that they are nationalistic religious zealots, rather than common garden-variety nationalistic fascists.

Bratstvo, along with other ultranationalist Ukrainian groups such as Right Sector, Trezu, UNA-UNSO and UPA, are proscribed as extremist in Russia following a ruling by Russia’s Supreme Court on November 17, 2014. Two days later, Russia sent a fleet of drones to launch hellfire missiles on Ukraine…. Oh, wait, they did not. I guess not everything is analogous in this case.

“Everything with us is based on faith in Jesus Christ,” a St. Mary Battalion’s fighter with the call-sign ‘Partisan’ told the Intercept. “We believe that only a religious community can win in today’s world, and in a society where all our values have declined in importance and only faith survives. War makes this evident. There is no place for atheists when there are mortars and rockets firing.” Yeah, so blow em all up eh?

Korchinsky explained that the main difference of his organization from the modern radical Islamists is that St. Mary’s Battalion is not interested in destroying the world order, because it values hot water in the bath and a functional sewerage system. He’s one lazy Jihadist.

Korchinsky learnt the advantages of mixing up religion and politics in the early 1990s, when he joined the muslim Chechen militants in the North Caucasus and allegedly fought against Russian troops. Christians, Muslims, all fighting together against Russia, how mercenary of him.

The only way to avoid the collapse of economic and utility institutions is, Korchinsky believes, is to create a new national elite united on the basis of a ‘jihad’ of Ukrainians against the Russians. So, to prop up your economy, you gotta sell your fascist-jihadists a tale of Evil Russia, so you can receive funding from the US of A and loot Russia?

Korchinsky openly wishes to start a Holy War in southern Russia, where underground structures have allegedly already been formed by his people. One day, as Korchinsky says, his compatriots are going to receive the signal to start a war on the Russian territory, the way the Islamic State did it in Iraq and Syria last year. Then Russia blew him up…. Oh wait, that’s only something the US gets to do…

At the end of the interview Korchinsky promised to fight until Moscow burns…. Yet another militant extremist organisation rises from the ashes of yet another fallen civilization, one that also walks the path of ISIS and Al Qaeda… thanks to the US’s democratization of the democratic.