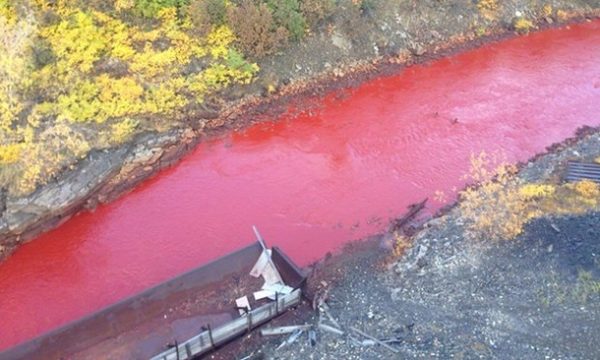 Residents living in the Russian city of Norilsk, in the vast province of Siberia, have posted images on social media showing as a river turns blood red in color.

The incident reportedly happened on Sept. 6, at the Daldykan River, located above the Arctic Circle. Residents expressed shock, although revealing how this is not the first time the river has changed color.

Russian authorities in the Siberian area said they are still determining why the river changed color; evaluating possible environmental damages. According to CBC, the Russian Ministry of Natural Resources and Environment released a statement noting an investigation was underway. The ministry suspect a possible breakdown of an industrial plant at the facilities of mining company, Norilsk Nickel, was the cause of the disaster. Norilsk Nickel is said to be the world’s largest nickel producer.

Greenpeace Russia, who has also been monitoring the situation closely, shared pictures of the strange blood-color river on the Internet. Vladimir Chuprov, head of energy program for the organization, said Norilsk Nickel is responsible for the pollution of the river. He revealed that Norilsk Nickel is controlled by the country’s tycoon, Vladimir Potanin, and that the company has caused significant damage to the environment and the human population in the area. Mr Chuprov bemoaned the level of industrial recklessness and its effect on the population in the area. However, in a sharp rebuttal, Norilsk Nickel issued a statement denying involvement. The company said it too, is also monitoring the situation, and has ordered its environmental assessment officials to conduct tests on the river to ascertain the possible causes of how a river turns blood red. Norilsk city officials told the state-run news agency Sputnik that the river is not connected to the city’s public water supply system, and that the incident doesn’t pose an immediate threat to residents of the city.

According to local commentators in the Siberia province, the area is rich in nickel, copper and palladium. These minerals attract both big and small mining companies to the area. Norilsk city officials said Norilsk Nickel should not be the only suspect on the incident, but should also include other small companies mining in the area, as well.

This article (Fear Grips Residents of a Russian City as River Turns Blood Red [Photos]) is a free and open source. You have permission to republish this article under a Creative Commons license with attribution to the author and AnonHQ.com.