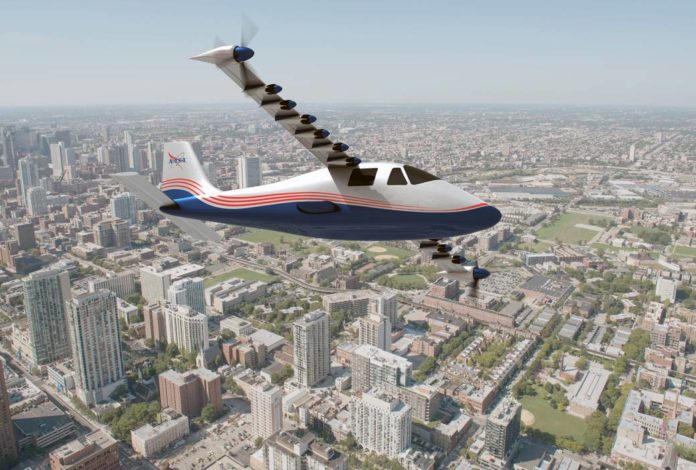 America’s National Aeronautics and Space Administration (NASA), is planning a test flight for its battery-powered two-seater aircraft, saying it would not rely on fossil fuels; cruise at higher speeds than the existing traditional aircraft, and reduce noise and carbon emissions for future air travel. The electric plane — which NASA is calling the X-57 — includes 14 electric motors. While all 14 motors would operate during takeoff and landing, only two would be needed once the plane is flying high in the sky.

The goal of Maxwell and the larger X-planes, insists NASA, is to figure out ways in which to reduce fuel use and noise, so that these new technologies can be introduced into the marketplace. While the X-57 could be ready to fly as soon as next year, NASA says a low-boom, low-noise, and low-emission supersonic commercial passenger plane with a fully electric propulsion system, could be ready as soon as 2035.

NASA explained the futuristic capabilities of X-57 in a statement:

“Maxwell will be powered only by batteries, eliminating carbon emissions and demonstrating how demand would shrink for lead-based aviation fuel still in use by general aviation. Distributing electric power across a number of motors integrated with an aircraft will result in a five-time reduction in the energy required for a private plane to cruise at 175 mph.

“Energy efficiency at cruise altitude using X-57 technology could benefit travelers by reducing flight times, fuel usage, as well as reducing overall operational costs for small aircraft by as much as 40%.  Finally, as most drivers of hybrid electric cars know, electric motors are quieter than conventional piston engines. The X-57’s electric propulsion technology is expected to significantly decrease aircraft noise, making it less annoying to the public.”

The concept of using electric motors to power airplane systems dates back to World War II, when the B-29 Superfortress bomber used electric motors to power its gun turrets. However, using electrical power to actually propel planes has proved to be a challenging task till date. Matt Redifer, the chief engineer on the project, told The Washington Post:

“If batteries continue to be on the same rapid increase in energy density that they have been on over the past 10 years or so, one can envision five to 10 years out in the future the battery technology would be such that this particular aircraft could be enabled for a commercial-type aspect.”

In May 2015, NASA Langley tested a battery-powered, 10-engine remotely piloted aircraft with a 10-foot wingspan — a plane NASA researchers said could take off like a helicopter and fly like an aircraft. However, on July 10, 2015, Hugues Duval, a French pilot, made the first flight in a two-engine one-seater electric plane, flying from the French port of Calais to the English shoreline and back (a 22-mile journey). A few hours later, test pilot and designer Didier Esteyne flew Airbus’ battery-powered two-seater plane across the English Channel – a 46-mile journey from Lydd in south-east England to Calais – in about 37 minutes.

Apart from NASA and Airbus, Tesla also has a design for an electric jet. In October 2015, its visionary billionaire CEO Elon Musk told Marketplace:

“I do like the idea of an electric aircraft company. I think one could do a pretty cool supersonic, vertical, take-off and landing electric jet. That would be really fun. I have a design in mind for that… Excluding rockets, I believe one day aircraft and ships and all other forms of transport will go fully electric. Not half electric, but fully electric. No question.”

The development of an electric plane could prove valuable amid concerns about global warming and unprecedented noise and air pollution. According to a recent report from the U.S. Environmental Protection Agency, aircraft were responsible for about 8% of the greenhouse gases emitted by the U.S. transportation sector in 2014. That compares to 23% for medium and heavy-duty trucks and 61% for light-duty vehicles.

This article (Tesla of the Skies: NASA’s All-Electric Zero-Emission High-Speed Plane Ready to Fly) is a free and open source. You have permission to republish this article under a Creative Commons license with attribution to the author and AnonHQ.com.