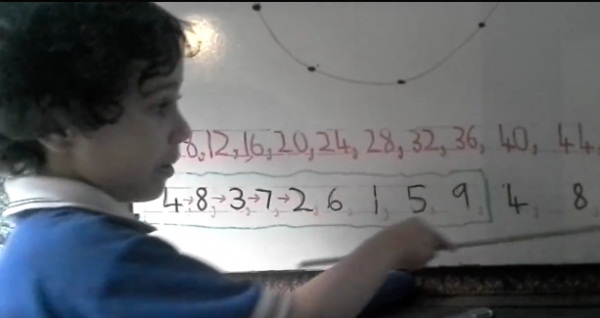 A widely shared video on Facebook, has showed a child brilliantly revealing secret geometric pattern hidden in the 4 times table.

The 7-year-old boy was only identified as Amir, with his nationality unknown to us. Amir remarkably showed viewers what happens to the 4 times table when a vedic mathematical principle, known as sutra digit sums, are applied to the table.

When Amir applied this formula to the 4 times table, it produced a beautiful geometric pattern of a nine pointed star. It is said the symbol has a significant symbolic meaning in different cultures. According to the editor of the Truth Theory, Luke Miller, the nine pointed star Amri revealed from the table in the video, is called the Enneagram. Miller says the name is taken from Symbol Dictionary. An enneagram is a nine pointed star composed of three overlapping triangles.

A nonagram is any nine-pointed polygon. In the mystic kabbalistic doctrine, it represents the sphere of Yesod, the moon, dreams and illusions. The enneagram, also said to be a well known emblem of the Baha’i faith, symbolizes the value of the word baha, “glory,” according to Miller. The Baha’i faith teaches that the human purpose is to learn to know and love God through methods such as prayer, reflection and being of service to humanity. The faith was founded in the 19th-century by Baha’u’llah in Persia, modern day Iran.

Miller further sheds light on the symbol Amir produced in the video, revealing another type of enneagram that was devised by the 19th-century mystic philosopher, George Gurdjieff. Gurdjieff invented a nine pointed glyph. Miller reveals the emblem’s unusual shape is constructed by mapping the sequence of musical octaves. The symbol has come to represent Gurdjieff’s Fourth Way Society and its philosophies. Some mystic philosophers believe Gurdjieff’s enneagram is likely based on the kabbalistic tree of life, which is said to represent the underlying geometry of the universe.

Although some Western observers may say that these symbols and signs have no significance to the natural world, in many cultures around the world, people attach great importance to them. Particularly for numbers, they have symbolic meanings in religions and secret societies across the world. To understand the world, we need to probe the natural and the supernatural. The two make up the world. Probably, it is time we start paying attention to some part of the supernatural world.

This article (Watch this Genius Child Reveal a Secret Geometric Pattern Hidden in the 4 Times Table [Video]) is a free and open source. You have permission to republish this article under a Creative Commons license with attribution to the author and AnonHQ.com.