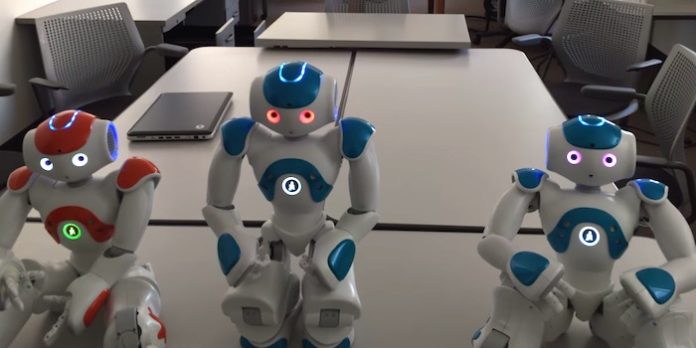 Roboticists at the Ransselaer Polytechnic Institute in New York built a trio of Nao robots, put them through the classic ‘wise men puzzle’ test of self-awareness, and were elated when one of them passed the AI test.

The puzzle goes as follows:

The King called the three wisest men in the country to his court to decide who would become his new advisor. He placed a hat on each of their heads, such that each wise man could see all of the other hats, but none of them could see their own. Each hat was either white or blue. The king gave his word to the wise men that at least one of them was wearing a blue hat – in other words, there could be one, two, or three blue hats, but not zero. The king also announced that the contest would be fair to all three men. The wise men were also forbidden to speak to each other. The king declared that whichever man stood up first and announced the color of his own hat would become his new advisor.

A similar situation was set up for the three robots – two were prevented from talking, then all three were asked which one was still able to speak. All attempted to say: “I don’t know”, but when one of them made the noise, the robot in question heard its own voice and it changed its answer to: “Sorry, I know now! I was able to prove that I was not given a dumbing pill.”

Team leader Selmer Bringsjord believes by passing many tests of this nature robots will build up a repertoire of abilities that will make them become very useful to humans. He perceives machines may never be truly conscious, but they could be designed with mathematical structures of logic and decision-making that convincingly resemble what we call self-consciousness in humans.

“What are we going to say when a Daimler car inadvertently kills someone on the street, and we look inside the machine and say, ‘Well, it wanted to make a turn?’ The machine has a system for its desires. Are we going to say, ‘What’s the problem? It doesn’t really have desires?’ It has the machine correlate. We’re talking about a logical and a mathematical correlate to self-consciousness, and we’re saying that we’re making progress on that,” Bringsjord told VICE.

However, since all three robots were coded the same, technically, all three passed the self-awareness test.

“They try to find some interesting philosophical problem, then engineer a robot that can solve that problem. They’re barking up the right tree,” said John Sullins, a philosopher of technology at Sonoma State University. ”

This Article (Robot Passes King’s Wise Men Puzzle, Demonstrates Self-Awareness) is free and open source. You have permission to republish this article under a Creative Commons license with attribution to the author and AnonHQ.com.