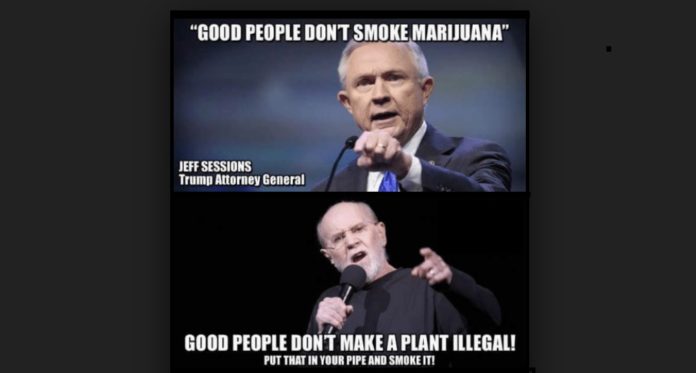 Jeff Sessions, the U.S. Attorney General, has outlined a new anti-drug strategy that gives local attorneys the discretion to use federal laws to crack down on marijuana possession, distribution and cultivation including in states where the plant is legal.

Sessions’ decision automatically reverses a 2013 memo issued under the Obama administration that allowed states to permit recreational marijuana use with certain safeguards.

Critics say the move represents a broken campaign promise by Donald Trump, who repeatedly pledged during the campaign trail that he would allow states to have their recreational marijuana laws. The attorney general also disregarded Congress’ decision in 2014 that forbids federal interference in state laws that permit medical use of marijuana.

Ron Paul, the former GOP congressman and onetime presidential candidate, says Sessions should step down because his actions are “unconstitutional”:

“And we permit high risk all the time. … Generally, we allow people to eat what they want, and that is very risky. But we do overly concentrate on what people put into their bodies. Just because you legalize something doesn’t mean everyone’s going to do it, and then if you look at the consequences, of the war? Why don’t the people just look and read and study Prohibition? … (a) total failure. And the war on drugs is every bit as bad and worse.

“People should have the right or responsibility of dealing with what is dangerous. Once you get into this thing about government is going to protect us against ourselves, there’s no protection of liberty.”

The Centers for Disease Control reported that 2016 had more fatal drug overdoses than any other year in U.S. history — about 63,600 or nearly 175 a day, with two-thirds linked to the opioid epidemic. Many are questioning why Sessions neglected the opioid epidemic and instead went after a plant that causes no harm to people.

Whether marijuana can help someone overcome an opioid addiction is unknown, but research suggests that states that have legalized medical marijuana have experienced drops in opioid-related deaths.