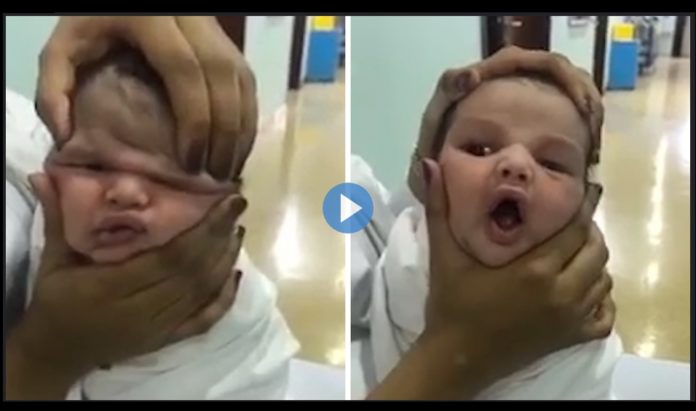 Three nurses at Taif Children’s Hospital in the Mecca Province of southwest Saudi Arabia have been fired after an unsettling video of the trio squashing the head of a newborn baby went viral.

In the shocking video, which was posted on YouTube, one of the three cruel nurses can be seen grasping the baby by its neck and forehead wringing and fudging the helpless infant’s face as her two colleagues look on and laugh. The unfortunate baby had been admitted to the children’s hospital for 10 days due to a urinary tract infection.

The nurses, who have not been named, were tracked and immediately fired by Saleh Al-Muanis, director of Taif Health Affairs. Their medical licenses have been revoked for compromising the dignity and safety of a newborn child; they are also banned from practicing nursing in other health departments.

The Ministry of Health and Taif Children’s Hospital confirmed on their Twitter accounts that the nurses in question were fired and had their professional licenses revoked:

Abdulhadi Al-Rabie, Taif Health Affairs spokesman, also confirmed the women had been fired for mistreating the baby after the shocking footage emerged online:

While the newborn’s father was shocked to see his baby being abused in a viral video, he called on the Ministry of Health to take stiff action not only against the abusive nurses but also against people who circulated the video on social media for public viewing.

WARNING: THE VIDEO HAS CONTENT THAT SOME MAY FIND DISTURBING

Dr. Mamdouh Eshi, who teaches medical ethics at the National Guard Hospital in Jeddah, Saudi Arabia, described the dreadful act by the qualified Saudi nurses as “a dark spot on the white coat of medical professionals”. He told Arab News:

“When it comes to children being victims, it’s a very natural reaction for people to sympathize so strongly with them because babies are voiceless and they cannot speak for themselves; thus, adults feel the need to speak for them.

“In retrospect, people who work in the medical sector, whether it be doctors or nurses, are under heavy scrutiny from the public. People expect them to respect their careers and responsibilities. To the people, doctors and nurses are the epitome of goodness, so they aren’t allowed any slights or shortcomings; their mistakes will always be exaggerated.”

While Walid Al-Zahrani, a journalist, said the nurses must be put to trial and named in public to let them understand that “people’s lives are not a matter of joke“, a couple of Saudis argued the punishment given to the nurses was an exaggerated reaction:

However, a lot of them claimed it was too light for “the assault” of an infant:

Meanwhile, some were too horrified at the disturbing footage. One Twitter user wrote: “How dare they do this? All three nurses should thank God I was not the baby’s mother. I’d squeeze all your faces much harder.”