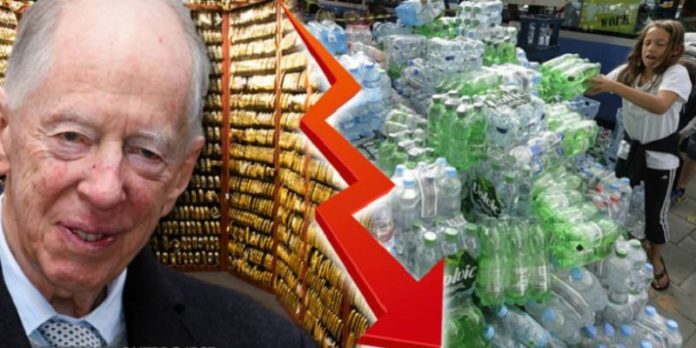 According to Nathaniel Charles Jacob Rothschild, who is the 4th Barron of the Rothschild household and a businessman, the bankers are conducting a great experiment in the history of money and it is important for the people of his company to be precise, and for the shareholders to preserve their wealth by buying lots of gold.

“We are therefore in uncharted waters and it is impossible to predict the unintended consequences of extremely low-interest rates, with some 30% of global government debt at negative yields, combined with quantitative easing on a massive scale,” stated Jacob Rothschild to his investors. “Nearly all classes of investment have been boosted by the rising monetary tide. Meanwhile, growth remains anaemic, with weak demand and deflation in many parts of the developed world.” He further added by saying that in these times, saving money is as important as preserving the assets of a company. He further supported his claims by writing that his company had lifted its investments in the British Pound by more than twenty percent, while increasing their investments in precious metals by more than five percent.

As per Jacob Rothschild, the decision to invest in gold, silver and other precious metals comes from many factors. Rothschild said some of the factors which happened at home are to be considered, i.e. the United Kingdom exiting from the European Union, but also factors such as the upcoming presidential elections in the United States; China’s slow growth rate; and the current situation in many parts of Africa, as well as the Middle East. If such events continue to happen (excluding a few), then gold and other precious metals are a good investment, he says.

Jacob Rothschild’s company, RIT Capital Partners – a securities and investment firm – published in its yearly report, stating that because of the dollar’s rise, the company found opportunities in many other currencies, as well as precious metals. Why? Because of their concerns of the falling US Dollar market.

As a result, the company invested more than $25 million Dollars in Blackrock Gold and another $10 million Dollars plus, in gold and silver. Rothschild is so sure about his investments, he claims that they are the new all times high for RIT Capital Partners.

Lastly, he stated that these investments reflect the change the company has made to overcome the difficult times the company had faced – and has yet to face.

However, when these investments were made, the share of Rothschild Investment Trust Capital Partners was under 1,615 pence. Now it sits at 1,745 pence (as of Oct. 3, 2016). The results of his investments can be seen already, and if that is the case, then those who can, should start buying gold and silver. It appears the proverbial writing is appearing on the wall.

This article (Rothschild Doubles Down on Gold as Banking Collapse Begins) is a free and open source. You have permission to republish this article under a Creative Commons license with attribution to the author and AnonHQ.com.