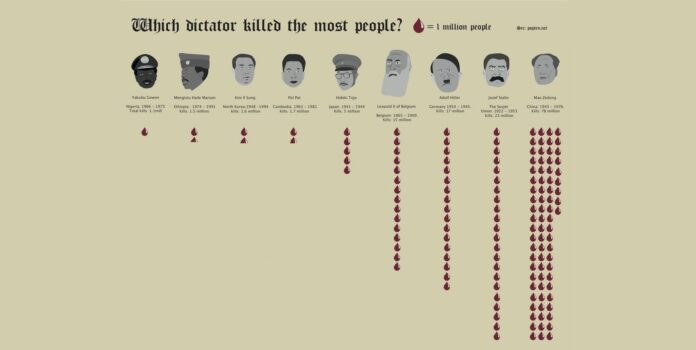 A popular infographic on the site memolition compares many different ruthless dictators through history, and shows their death counts illustrated by drops of blood to represent one million people killed.

Mao Zedong is at the top of the list, having directly or indirectly led to the deaths of 78 million people, followed by Joseph Stalin with an estimated 23 million, and Adolf Hitler with 17 million.

However, there are many scholars who suggest that these numbers are not so cut and dry, and may not offer an entirely accurate representation of what took place. To start, Joseph Stalin and Mao Zedong were both ruling over much larger populations, for a much longer time than Adolf Hitler, and many of the deaths that were caused under their regime were caused indirectly through poverty and famine.

Of course, Russia and China during these eras had brutal police states, where citizens were routinely killed or thrown into prison for defying the state. The primary goal of those regimes was maintaining power, which is fairly common of authoritarian regimes. However, with Hitler and the Nazis, the genocide was targeted at specific ethnic and social groups, and eugenics was at the forefront of the regime’s philosophy. Many scholars have argued that even though the Nazi regime killed fewer people than its communist counterparts of the time, they represented a unique danger because they were seeking to use military force to reshape the genetics of the world.

Leopold II of Belgium, who has been mostly forgotten by mainstream history, was also listed in the graphic. Leopold is said to be responsible for an estimated 15 million deaths. The vast majority of the killings took place during Belgium’s colonization of the Congo in Africa, where the country controlled a large number of mining operations. To encourage higher production at the mines, Leopold’s regime is said to have cut off the hands of men, women, and children when quotas were not met.

Each of these people were ruthless murderers, regardless of the circumstances, and many of the people who are in leadership positions in government today are not much different.