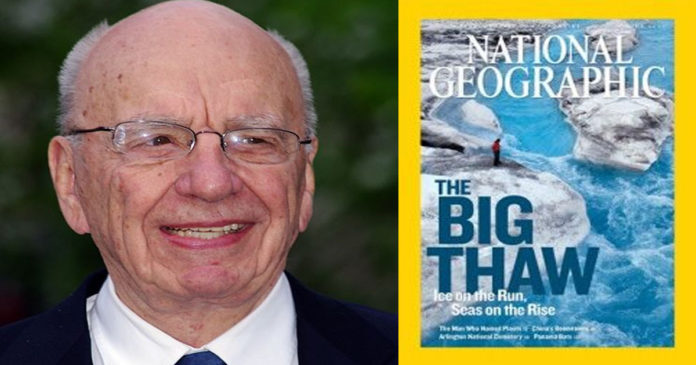 When news broke that Rupert Murdoch, evil overlord of Fox News, had purchased National Geographic, it sent shockwaves of panic through thinking individuals everywhere. After all, National Geographic has traditionally been one of the most well-known sources of scientific information, and Fox News is where any semblance of scientific knowledge goes to be beaten mercilessly with socks full of pennies before being unceremoniously dumped in a vat full of acid in Bill O’Reilly’s basement for easy disposal.

While National Geographic promised that there would be no editorial “meddling” from 21st Century Fox, Murdoch is already getting involved in other ways — specifically by laying off hundreds of the staff that made the company worth acquiring in the first place.

Staff members — all of them — were ordered into the office on November 3, unless they were traveling for business, on vacation, or otherwise not there by a rather horrific-sounding e-mail from CEO Gary Knell:

“To all NGS Staff:

“After very careful and serious consideration, we are ready to communicate how our restructuring and transformation will affect each employee at National Geographic. To that end, please make every effort to be available tomorrow, November 3rd, either in your regular work location, and/or by phone.

“If you are traveling for business, on vacation or plan to be out for any other reason, please notify Tia Freeman-Evans or Yvonne Perry in HR immediately, so we can make alternative plans to get in touch with you. If you know that someone on your staff will be out of the office on November 3rd, please let Tia or Yvonne know by 3 p.m. (Eastern) today, as well.

“Please watch your inbox for important information about your employment status tomorrow.

“I cannot thank you enough for your patience and hard work over the last few months. I am proud of how our teams and our organization have approached and responded to this transitional period. Looking ahead, I am confident National Geographic’s mission will be fulfilled in powerful, new and impactful ways, as we continue to change the world through science, exploration, education and storytelling.

Then, the staff waited, one by one, to be called into Human Resources to learn their fates. “No one knows how many will be axed today,” an unnamed source inside National Geographic told News Photographer magazine Tuesday. “The staff is sitting by their phones, waiting to be called down to HR.” Politico reports that, ultimately, about 180 employees — about 9 percent of the workforce — were subject to “involuntary separation,” while an undetermined number of employees were offered “voluntary separation agreements.”

In a statement, National Geographic shared its side of the story:

The entities combined have about 2,000 employees, and all staff have been advised as to their status as of closing. Involuntary separations will represent about 9% of the overall workforce reduction, many in shared services and a voluntary separation offer has also been made to eligible employees.

Sherry Brukbacher, a photo editor who had been working in her department since 2008, confirmed she was one of those eliminated by the merger:

“The CEO of National Geographic Society, Greg Knell, tried to claim back in September that there “there won’t be an [editorial] turn in a direction that is different form the National Geographic heritage,” Nathaniel Downes of Reverb Press wrote of the layoffs Tuesday. “Murdoch’s move today only served to prove Knell’s words hollow, with hundreds of talented people now served their pink slips. And with the recognition that Murdoch’s other enterprises do not reflect the standards held by National Geographic, and with Murdoch’s history of changing the editorial direction of purchased properties, today’s move indicates that we can expect a similar shift for National Geographic.”

One must wonder how National Geographic can maintain editorial control when many of those who were “separated” from the company were editors and other decision-makers. Will we soon be seeing headlines like “Global Warming: The Great Scam of the Century” and “Who Needs Polar Bears, Anyway”  gracing the once-reputable publication? Only time will tell — but this sudden layoff of a large percentage of the staff does not bode well for any who were holding out hope that the Fox merger would not permanently damage the integrity of National Geographic.