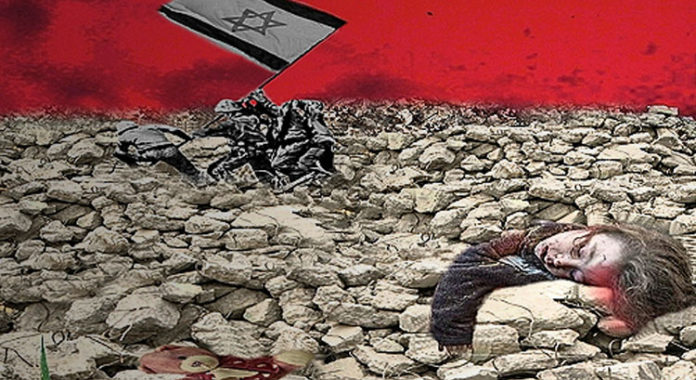 Not before time, a mass collective of Jewish voices speak out against Israeli treatment of Palestinians.

We recently reported on the ingenious idea of an Israeli cafe that encourages Jews and Arabs to eat together by offering them a 50% discount. Now, an international network of activists representing Jewish people around the world have joined forces to speak up against Israel’s occupation of Palestine.

Together, they have created an online petition called ‘Stop the Killing, End the Occupation’, with the following aims: “We call on our Jewish communities, and our broader communities, to publicly insist on an end to the violence, occupation, siege and military response and instead demand equality and freedom for the Palestinian people and justice for all.”

In the wake of increased violence carried out by both Palestinians and Jews in recent weeks- including the death of a 2 year-old Gazan girl and a near-fatal stabbing of a 13 year-old Israeli boy- the group have released a powerful statement that calls on the Israeli government (and people) to recognize the reasons for Palestinian aggression.

“As members of Jewish communities around the world, we are horrified by the violence that is sweeping the streets of Palestine/Israel, costing the lives of over 30 people…in the past two weeks alone,” the statement begins, noting how over 1000 people have been injured during this period. “Fear has completely taken over the streets of Jerusalem, the center of this violence,” they say, and the root causes of this are clear:

“Decades of dispossession, occupation and discrimination are the main reasons for Palestinian resistance,” the statement goes on. “Further Israeli military repression and ongoing occupation and siege will never end the Palestinian desire for freedom nor will it address the root causes of violence. Indeed, the current actions by the Israeli government and army are likely to create further violence, destruction, and the entrenchment of division. Only justice and equality for all will bring peace and quiet to the residents of Israel and Palestine.”

The coalition believes that change cannot come from the Palestinian side, being dispossessed of power and freedom. Instead, change needs to be made within the Jewish community: “As a group of Jews from around the world we believe that immediate change needs to come from the Israeli government and Israeli people,” they say. “It is incumbent on all Jews around the world to pressure the Israeli government – and those who follow and support its words and deeds – to change its approach. The military crackdown must cease immediately, Palestinians must be allowed complete freedom of movement. It is also a responsibility of Jewish people worldwide to obligate the countries in which we live to immediately cease the economic and military support of the ongoing Israeli occupation in Palestine and siege of Gaza.”

The open letter was signed by a huge number of Jewish organizations, campaign groups and scholars from Canada, the USA, Australia, Brazil, Belgium, Sweden, Switzerland, South Africa, and many other countries including Jewish people within Israel. They publicly “reclaim Jewish identity not as a nationalist identity but as one that celebrates our diverse roots, traditions & communities wherever we are around the world.”

You can sign the coalition’s petition here, and watch the video below to see the controversial Professor Norman Finkelstein– who considers himself a ‘former Jew’- telling an Israeli girl at a conference why her “crocodile tears” over the Holocaust are nothing but hypocrisy, until the Jewish community chooses not to treat Palestinians in much the same way the Nazis treated the Jews.

“My father was in Auschwitz, my mother was in a concentration camp,” Finkelstein tells her. “Every single member of my family on both sides was exterminated, and it is precisely and exactly because of the lessons my parents taught me that I will not be silent on Israel‘s crimes against the Palestinians.” Some of the audience clap him, others boo, but Finkelstein refuses to back down. “There is nothing more despicable than to use their suffering and their martyrdom to justify the [brutality] Israel commits against the Palestinians.” Finkelstein ends his angry speech by telling the sobbing girl: “If you had any heart you’d be crying for the Palestinian people.”

Do you agree? Let us know your comments below.

This article (New Global Coalition Of Jews Attacks Israel’s Occupation Of Palestine) is free and open source. You have permission to republish this article under a Creative Commons license with attribution to the author and TrueActivist.com.