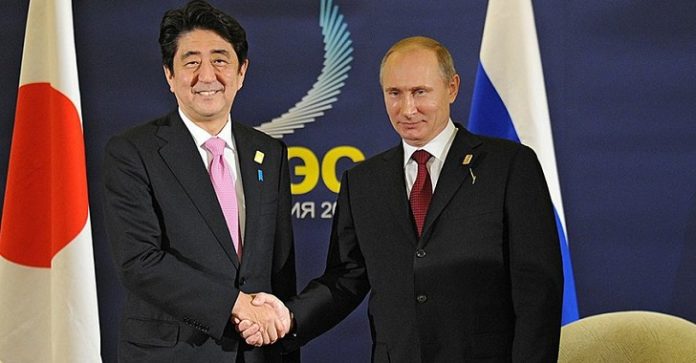 Tokyo — Over the weekend, the Japan Times reported Japan might agree to Russia’s demand that U.S. troops be forbidden from being stationed on the long-disputed Kuril Islands. Japan’s decision will likely hinge on whether such a move will persuade Moscow to return control of those islands to Tokyo.

From The Japan Times:

“Tokyo might promise Moscow that returning the disputed islands off Hokkaido to Japan will not mean that U.S. military forces will be stationed there in line with Japan-U.S. security arrangements, diplomatic sources have said.

“Tokyo believes such a promise will facilitate negotiations on the long-simmering dispute because Russia is particularly sensitive about U.S. military moves.

“The idea has surfaced ahead of Russian President Vladimir Putin’s trip to Japan in December. Japan sees the visit as a chance to make progress on the decades-old territorial row, which has prevented the two countries from concluding a peace treaty to formally end World War II.”

Russia acquired the Southern Kurils, which the Japanese have traditionally called Shikotan, Kunashiri, Etorofu, and the Habomai islet group, following the fall of Japan and its subsequent signing of an agreement to give up the territory.

Japan signed the agreement out of necessity but has always held that the islands are traditionally Japanese. Now, the administrative rights to those islands are once more being revisited by both Russian and Japanese officials.

On October 9, Japanese media, citing government sources, reported that Prime Minister Shinzo Abe was “examining the option of concluding a peace treaty with Russia upon Moscow’s agreement to return two of the four disputed islands northeast off Hokkaido.”

A spokesperson for Japan’s foreign ministry later denied that allegation, reiterating Japan’s all-or-nothing stance regarding control of the four islands.

Reuters, however, while noting in an October 9 article that Japan “has long demanded that the sovereignty of all the territories be resolved before a peace treaty is signed,” also pointed out that “some politicians and experts have said Abe may alter course.”

Two weeks later, and the Japanese media is reporting is that not two, but all four islands are now on the negotiating table. And the Russian price, according to Japanese diplomatic sources, is that the U.S. military will be refused access to the territory.

“Russia won’t agree to hand over (the islands) unless the possibility of stationing the U.S. military there is ruled out,” sources told The Japan Times.

The territory is highly strategic for Russia, as it faces the Sea of Okhotsk. A foreign military force, like the United States, occupying those islands, “could hamper both essential military drills and the use of a major access route to the Pacific Ocean.”

While Japan still very much follows the lead of its longtime ally, the U.S.— even to the extent of going along with continued sanctions against Russia over Ukraine — the fact remains Japanese-Russian ties are warming. It’s also clear this is something the Japanese want — for a variety of reasons.

Note that even while agreeing to continue the sanctions, Prime Minister Abe highlighted the importance of strengthening economic cooperation with its regional neighbor, stating, “We believe that developing economic ties with Russia is beneficial not only for Russia but for Japan as well.”

It would seem that on the surface, both Japan and Russia each have something the other wants. Japan wants control of its islands back, and Russia wants to prevent the U.S. from positioning itself militarily at such a crucial access point to the Pacific.

If such a deal is reached, it would mean far more than a simple transference of territorial control. It would mean one of the primary obstacles to an official Russian-Japanese peace treaty would be eliminated.

This article (Russia, Japan May Finally Sign Peace Treaty to Officially End WWII Conflict) is free and open source. You have permission to republish this article under a Creative Commons license with attribution to James Holbrooks andtheAntiMedia.org.