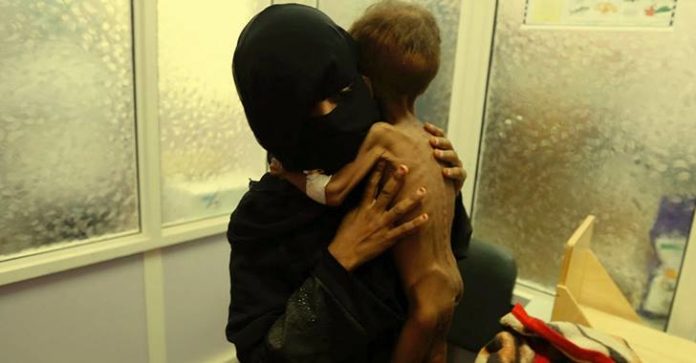 As reports repeatedly surface regarding Saudi Arabia’s deadly actions in Yemen, the media continues to largely ignore the blatantly horrific aggression being launched on Yemeni civilians by a U.S. ally. Instead, it perpetually hypes up Russia’s actions in Syria.

But as recently as October 30, 2016, the Guardian reported the U.S.- and U.K.-backed Saudi coalition delivered an air strike on a prison complex in western Yemen, killing at least 58 people. The victims were mostly prisoners who were serving sentences for low-level offenses.

Attacking prisoners with sophisticated weaponry is one of the lowest forms of barbarism possible given the fact prisoners are trapped inside with no means of escape.

This event follows a recent Saudi attack on a Yemeni funeral that killed over 140 civilians and injured well over 500 others in what was aptly dubbed a “lake of blood.”

The United States and its so-called allies are playing a dangerous game of torture with the Yemeni people. Where high-level bombs (including British-made banned munitions) that have directly targeted civilians are unable to do the job, the coalition has launched a widespread attack on the basic needs of Yemeni civilians, which has now resulted in widespread famine.

According to Martha Mundy, professor emeritus at the London School of Economics, the Saudi coalition has been hitting agricultural land. Noting just 2.8 percent of Yemen’s land is cultivated, she argued that “[t]o hit that small amount of agricultural land, you have to target it.”

Further, she pointed out that the Saudi coalition “was and is targeting intentionally food production, not simply agriculture in the fields.” The coalition has been striking the transport routes aid groups have been using to transport food, as well as targeting markets, stores, factories, and food trucks.

This direct attack on civilian infrastructure comes in tandem with a blockade imposed by Saudi Arabia that has created a humanitarian catastrophe. The U.N. has warned that at least 14 million Yemeni civilians – more than half of its population – are starving.

So what has the U.S. done in response? It has attacked Yemen directly. Supposedly, Obama is deeply troubled by the human rights situation in Syria, and he is currently able to criticize the Assad government with impunity because responsibility for the war in Yemen has fallen largely on the Saudi-led coalition. However, the United States is not a passive player in the Yemeni conflict. Many Yemenis deem the U.S. to be behind the current conflict, and the American government has been providing all manner of support to the Saudi-led coalition to carry out their assault on the country. None of this even takes into account the fact Obama has been drone bombing Yemen for years, which has resulted in thousands of civilian deaths.

The U.S. is well aware that the Saudis’ current procedures, even with American and British assistance, are woefully inadequate at avoiding hospitals. Rather, they are adept at causing mass civilian death — and these Western powers continue to support the onslaught. The lack of compassion towards the Yemeni people was captured brilliantly by newly-appointed U.K. Foreign Secretary Boris Johnson — Britain’s version of Donald Trump — when he stated someone else will “happily supply arms” to the Saudis if the U.K. stops doing so.

Further, the fact the U.S.-backed Saudi coalition is striking a country that is home to both ISIS and al-Qaeda in the Arabian Peninsula but have not attempted to hit these two groups at all within a 19 month period, tells one all they need to know about the phony war on terror.

This article (Media Silent as US-Backed Coalition Purposely Starves Yemeni Civilians) is free and open source. You have permission to republish this article under a Creative Commons license with attribution to Darius Shahtahmasebi andtheAntiMedia.org.