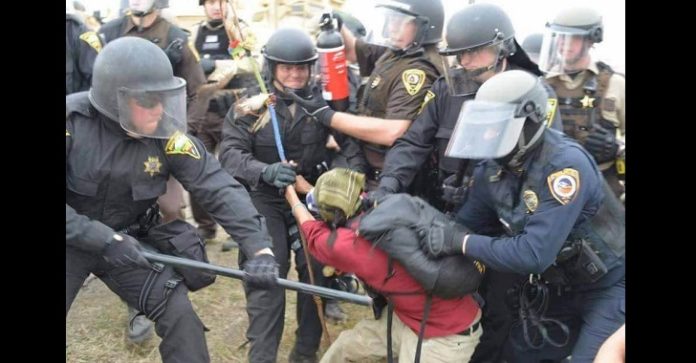 North Dakota — Following the recent mass arrests of 141 people at the Dakota Access Pipeline construction site located near Standing Rock, North Dakota, an anonymous donor just donated $2.5 million to bail out everyone who was arrested at the protests.

The news came after Tamara Francis-Fourkiller, a tribal leader from the Caddo Nation tribe in Caddo County, Oklahoma, was arrested at Standing Rock. Francis-Fourkiller was released after spending two days in jail, but her family says she was just an innocent observer in the clashes between militarized law enforcement and Native American activists, or “water protectors.”

According to local news affiliate News On 6:

“Family members of Caddo Nation chairwoman Tamara Francis-Fourkiller said an anonymous donor paid $2.5 million late Saturday afternoon to release everyone arrested on Thursday at the Dakota Access Pipeline site. They said, however, that Francis-Fourkiller should not have been arrested in the first place.”

Though the donor who sent the $2.5 million remains anonymous, it appears the person is connected to the Caddo Nation tribe in some way.
News9.com – Oklahoma City, OK – News, Weather, Video and Sports |
The anonymous donation is welcome news to those arrested in the mass crackdown last Thursday, however, Standing Rock is still raising legal defense funds for future arrests — which are all but guaranteed to happen.

This article (Someone Just Donated $2.5 Million to Bail Out Everyone Arrested at Standing Rock) is free and open source. You have permission to republish this article under a Creative Commons license with attribution to Nick Bernabeand theAntiMedia.org.