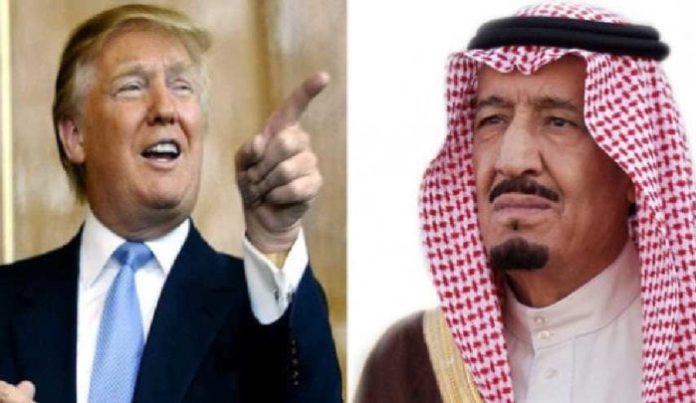 During the political campaign period of the now President-elect Donald Trump, he threatened to cut the United States’ oil import from Saudi Arabia if elected. He took a strong stand against the country’s clandestine deals with Saudi Arabia.  “Without us, Saudi Arabia wouldn’t exist for very long,” Trump said in March 2016. Trump also said in a major energy speech that he would bring about a complete American energy independence from the country’s enemies and the global oil cabals— Organization of the Petroleum Exporting Countries (OPEC).

According to Trump, Saudi Arabia and other Arab countries should commit ground troops to fight the so-called Islamic State of Iraq and Syria (ISIS), since they are also part of the problem in the region. Trump is skeptical about ISIS. He believes the group was specially created to cause chaos and confusion while the elites continue to loot wealth in the Middle East for themselves.

And now that Trump has become the president, before he even takes the oath of office in January 2017, Saudi Arabia has started mounting pressure against him. Saudi Arabia’s Energy Minister Khalid al-Falih has said the United States banning oil imports from the Kingdom – under the Trump administration – would spark serious consequences. Mr Falih admitted oil is the driving force behind the global economy, revealing that the United States benefits more from importing oil from his country.

“At his heart, President-elect Trump will see the benefits and I think the oil industry will also be advising. Energy is the lifeblood of the global economy [and the U.S.] benefits more than anybody else from global free trade,” Falih told the Financial Times in a recent interview.

Despite the soaring of oil production in states like North Dakota, Texas and Colorado, the United States still relies on a ton of crude from OPEC to feed its massive economy.

Many in the current United States administration, including president Obama himself, has warned that banning imports from a specific country risks disrupting diplomatic and commercial relationships and would also violate the longstanding United State commitment to free and open energy markets. But of course, the policy benefits the few political and business elites at the expense of the larger American public interests.

Trump made lots of promises to change what he described as the rigged system of the country. Except for his rhetoric, many Americans expect him to turn things around by getting rid of the cabals who have been sucking the wealth from the country.

This article (Saudi Arabia Issues Stern Warning to Trump Over Oil Import Ban) is a free and open source. You have permission to republish this article under a Creative Commons license with attribution to the author and AnonHQ.com.