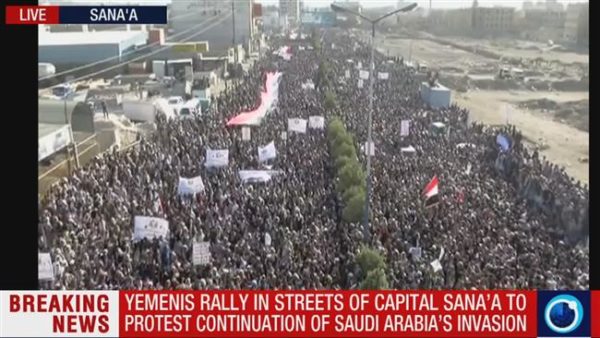 Disaster nearly happened on August 20, 2016 in the capital of Yemen, when Saudi warplanes reportedly dropped bombs close to where a massive rally was being held against airstrikes in the country.

The conflict in Yemen started in 2014. A rebel group from the Houthi movement allied with troops loyal to the former president of the country, Ali Abdullah Saleh and captured the majority of the country, including the capital Sana’a. The Houthis belong to the Shia faction of Islam, and therefore have support from Iran – a major Shia country in the region. The current President who the Houthis want to oust, Abd Rabbuh Mansur Hadi is a Sunni, and also has the backing of Saudi Arabia – a major Sunni country in the region.

In March 2015, Saudi Arabia convinced other Sunni countries in the region to form a coalition aimed at dropping bombs against the Houthis. The airstrikes exacerbated the already fragile situation. The Houthis, too have received arms supply and fighters from Iran. This has devastated the civilian population in the country. More than 10,000 people are estimated to have died from the conflict. 2.8 million civilians have been driven out of their homes. Recently, the United Nations announced that the war in the country has left over 14 million – about half of the country’s population – without food. This figure includes more than 370,000 children suffering from severe acute malnutrition

At a recent and unsuccessful peace talks, held in Kuwait between the Houthi rebels and the government, it was proposed that a Supreme Political Council (SPC) – a coalition between the Houthis and other political actors – should be in charge of the country to end the fighting. However, the warring factions failed to agree on the composition of the SPC, abandoning the talks. Civilians, obviously sick and tired of the constant raining of bombs and shellings, decided to hold a rally on Saturday, August 20, to protest against the Saudi bombardments and call for the SPC to be implemented, to help end the human suffering.

As they gathered at Tahrir Square – the main city square in Sana’a protesting – Saudi warplanes dropped bombs closer to where the protest was taking place, in an attempt to scare the protesters. No casualties were recorded, but some of the protesters said it was a terrifying moment.

Video posted online showed hundreds of thousands of Yemenis gathering at the Square for the peaceful protest. Somebody can be heard speaking in Arabic, condemning the airstrikes and the horrible attacks by the warring factions, urging for an immediate end to the war.

Press TV reports that the protesters denounced the legitimacy of the current administration. It is said the protesters waved Yemen’s flags and chanted slogans: “We will sacrifice our souls and blood for the sake of Yemen.”

Some protesters also reportedly carried placards with messages such as: “Reforms are the most efficient popular force in the face of enemies.” The Saudis have not commented on why the bombs were dropped close to where the peaceful protest was taking place.

Meanwhile, the United States has announced its withdrawal of the military staff helping the Saudis carry out airstrikes in Yemen against the Houthi rebels. The United States, Saudi Arabia and other Sunni Arab nations formed the Joint Combined Planning Cell to focus on logistics, air-to-air refuelling of coalition warplanes and intelligence support in Yemen, at the beginning of the air campaign.

A statement from the Pentagon said the United States has expressed concerns over civilian casualties recorded from the airstrikes. Pentagon spokesman, Adam Stump said in a statement: “Even as we assist the Saudis regarding their territorial integrity, it does not mean that we will refrain from expressing our concern about the war in Yemen and how it has been waged. In our discussions with the Saudi-led coalition, we have pressed the need to minimize civilian casualties.”

This article (Saudi Warplanes Strike Close to where Many Protesters had gathered to Protest against Airstrikes in Yemen) is a free and open source. You have permission to republish this article under a Creative Commons license with attribution to the author and AnonHQ.com