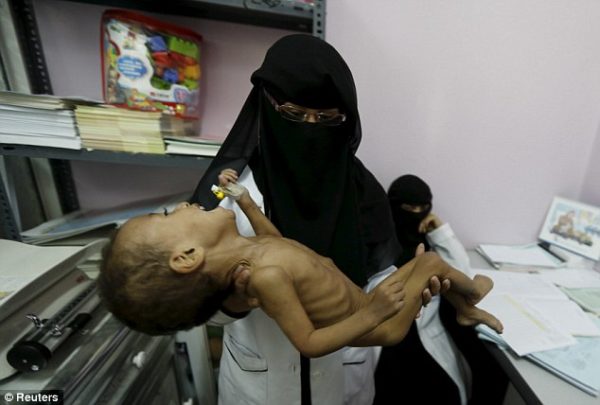 The United Nations has sounded an alarm bell in the restive country of Yemen, which has been torn apart by proxy powers of the Kingdom of Saudi Arabia and the Islamic Republic of Iran.

According to the world governing body, the 15-month-old devastating war in the country has left over 14 million – about half of the country’s population – without food. This figure includes more than 370,000 children who are suffering from severe acute malnutrition.

Severe acute malnutrition is a condition when a child has a very low weight, due to lack of food. The child becomes visibly frail, weak and skeletal, almost on the verge of death. It is a major cause of death for children under the age of five in many poor countries. The United Nations has stated that these people who are going hungry, need urgent food and medical aid. The organization estimated that some 500,000 children under the age of five are suffering from malnutrition in the country. Two thirds of these unfortunate children are said to be so sick, that they could die if they don’t receive immediate assistance.

Spokesman for the United Nations children’s agency in Yemen, Mohammed al-Asaadi told Aljazeera in an interview that the situation in the country has gotten worse, as compare dto last year. He said the country has fallen deep into the conflict.

“At least 370,000 children are suffering from severe acute malnutrition. We’re talking about a 50 percent increase compared to the number we had earlier this year,” al-Asaadi openly said.

Mr al-Asaadi revealed further, the cost of food has skyrocketed since the start of the war. This hyperinflation has rendered many of those who are poor, unable to buy food or medicine. It has resulted in a serious suffering for the vulnerable, who make up the majority of the country’s population. “The people are unable to buy food. Good crops could help the situation, but millions are out of work and countless more displaced. Until inflation is addressed the situation will continue to deteriorate,” al-Asaadi said.

Apart from what al-Asaadi told Aljazeera, the news network’s reporters on the frontlines in Yemen caught up with some poor residents who narrated how serious the situation has become for them.

In the country’s fourth-largest city of Hodeidah, which has been besieged by rebel forces, a resident named Taqwa Mohammad said the dramatic hike in food prices is having a devastating impact on her children. “I can’t afford milk or medicine for the children. If one of them gets sick, I can’t take him to the doctor, I borrow fever and cough medicines from the neighbours,” she said amid tears.

Meanwhile, as these innocent civilians who have nothing to do with the conflict are suffering, the belligerents and their sponsors are busy fighting for control of the country. The conflict in Yemen started in 2014. A rebel group from the Houthi movement, allied with troops loyal to the former president of the country, Ali Abdullah Saleh, captured the majority of the country, including the capital Sanaa. The Houthis belong to the Shia faction of Islam, and therefore have support from Iran, which is a major Shia country in the region.

The current President who the Houthis want to oust, Abd Rabbuh Mansur Hadi is a Sunni, and also has the backing of Saudi Arabia, which is also the major Sunni country in the region.

In March 2015, Saudi Arabia convinced other Sunni countries in the region to form a coalition aimed at dropping bombs in the air against the Houthis. The airstrikes exacerbated the already fragile situation. The Houthis, too have been receiving arms supply and fighters from Iran.

More than 9,000 people are estimated to have died from the conflict. 2.8 million civilians have been driven out of their homes. Several medical facilities have been destroyed, leaving the population with no access to healthcare. Humanitarian groups trying to help vulnerable people, have struggled to deliver aid to large parts of the country, due to the fighting and airstrikes. The medical aid charity Doctors Without Borders has described the situation as extremely challenging.

Peace talks held recently in Kuwait between the rebels and the government, have broken down. Nobody can predict when peace will return to Yemen.

This article (14 Million People Going Hungry in Yemen, 370,000 Children Suffering Severe Acute Malnutrition) is a free and open source. You have permission to republish this article under a Creative Commons license with attribution to the author and AnonHQ.com.