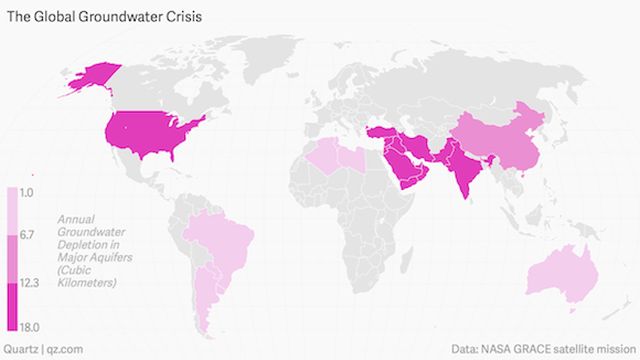 A third of the world’s biggest groundwater basins are being rapidly depleted and are seriously threatened. Why? Because significant segments of the Earth’s population are consuming groundwater quickly, without knowing when it might run out.

Using readings generated by NASA’s twin Gravity Recovery and Climate Experiment (GRACE) satellites, a team of scientists led by the University of California, Irvine, examined the Earth’s 37 largest aquifers between 2003 and 2013, and found that 21 aquifers have declined – many of them in arid or semi-arid regions. 13 of those declining aquifers were classified as being “highly stressed,” “extremely stressed,” or “overstressed” [with nearly no natural replenishment to offset human consumption].

In two new studies, a team of researchers — which included co-authors from NASA, the National Center for Atmospheric Research, National Taiwan University and UC Santa Barbara — found that the Northwest Sahara Aquifer System, which supplies water to 60 million people, is the most overstressed in the world. The Indus Basin aquifer of northwestern India and Pakistan is the second-most overstressed, followed by the Murzuk-Djado Basin in northern Africa. California’s Central Valley was classified as highly stressed.

Alexandra Richey, a graduate student at the University of California, Irvine, and lead author of both studies, said in a statement:

“What happens when a highly stressed aquifer is located in a region with socioeconomic or political tensions that can’t supplement declining water supplies fast enough? We’re trying to raise red flags now to pinpoint where active management today could protect future lives and livelihoods. If we continue to use groundwater the way it’s being used, then there’s a high chance that it could be depleted to the point that we can no longer use it in my lifetime in certain areas.”

According to the studies, rudimentary and widely varying estimates dating back to the 1960s and ’70s are often the only available guesses of how much groundwater remains in aquifers. Since they lack accurate data about how much water is available in the Earth’s dwindling reservoirs, it becomes important to “understand what some of the tipping points are” before our greed starts threatening our survival as well as cause severe ecological damage [The study cites an estimate that groundwater is the primary source of water for about 2 billion people].

Jay Famiglietti, a professor at the University of California, Irvine; principal investigator of the research; and senior water scientist at NASA’s Jet Propulsion Laboratory in Pasadena, California, added:

“The red flags are that over half of the world’s biggest aquifers are being depleted. They are past sustainability tipping points, and a third of those big aquifers — 13 of those — are seriously distressed. Available physical and chemical measurements are simply insufficient. Given how quickly we are consuming the world’s groundwater reserves, we need a coordinated global effort to determine how much is left.“

How do we know how much water is left? By drilling deep beneath the surface. And why are we not doing it? It is expensive, painstaking, and time-consuming to study groundwater. Famiglietti observed:

“It is crazy and it is unacceptable that we have not done the exploration of the world’s major aquifers, including those in the United States, which we absolutely need to do. If they were oil instead of water, they would have been plumbed to their great depths to understand the availability of the resource.”

According to a new analysis, at least two-thirds of the global population — over 4 billion people — live with severe water scarcity for at least one month every year. Nearly half of those people live in India and China.

That’s not the scariest part. The scary part is that 500 million people live in places where water consumption is double the amount replenished by rain for the entire year, leaving them extremely vulnerable as underground aquifers run down. Yemen could run out of water within a few years, but many other places are living on borrowed time as aquifers are continuously depleted, including Pakistan, Iran, Mexico, and Saudi Arabia, reports The Guardian.

“The results imply the global water situation is much worse than suggested by previous studies, which estimated such scarcity impacts between 1.7 billion and 3.1 billion people. The new work also showed 1.8 billion people suffer severe water scarcity for at least half of every year.

This article (Red Flag: Two Billion People Could Run Out Of Water Within A Few Years) is free and open source. You have permission to republish this article under a Creative Commons license with attribution to the author and AnonHQ.com.