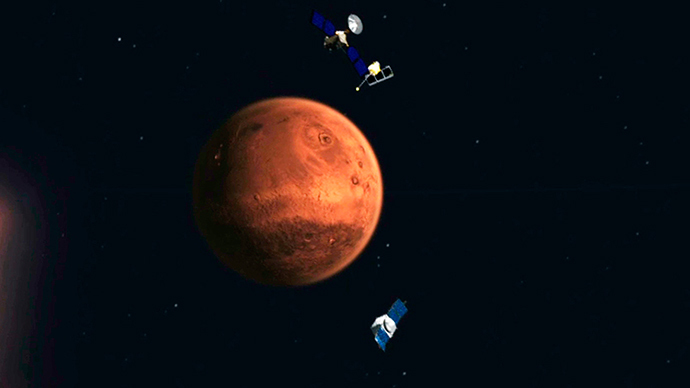 Scientists from Northumbria, Edinburgh, and Newcastle have theorized that dry ice or carbon dioxide, which is in abundance on Mars, could power human colonies on the Red Planet in the future.

A research published in Nature Communications has proposed a new engine that would harvest energy from dry ice to generate power on Mars. NASA’s Mars Reconnaissance Orbiter, based on the seasonal appearance of gullies on the planet’s surface, suggests that dry ice occurs naturally and is in good supply on the Red Planet. In the case of carbon dioxide, blocks of the material are able to ascend above a hot surface because of protection given by the layer of evaporated gas. Researchers propose harnessing the power of that gas to power engines – the first time anyone has proposed to use the Leidenfrost effect to generate energy. Dr. Rodrigo Ledesma-Aguilar, one of the co-authors of the research paper, said, “By placing water droplets and small blocks of dry ice on top of hot, turbine-like surfaces, we have used the Leidenfrost effect to create rotational motion. The turbines channel the released vapor, whose flow in turn drives the levitating surface above to rotate”.

“Carbon dioxide plays a similar role on Mars as water does on Earth. It is a widely available resource, which undergoes cyclic phase changes under the natural Martian temperature variations. Perhaps future power stations on Mars will exploit such a resource to harvest energy as dry-ice blocks evaporate, or to channel the chemical energy extracted from other carbon-based sources, such as methane gas. One thing is certain: our future on other planets depends on our ability to adapt our knowledge to the constraints imposed by strange worlds, and to devise creative ways to exploit natural resources that do not naturally occur here on Earth,” Dr. Rodrigo added.

An engine based on the Leidenfrost effect is different to the steam-based used on Earth. “The high-pressure vapor layer creates freely rotating rotors whose energy is converted into power without the need of a bearing, thus conferring the new engine with low-friction properties,” explained Dr. Gary Well, another co-author.

“This is the starting point of an exciting avenue of research in smart materials engineering. In the future, Leidenfrost-based devices could find applications in wide ranging fields, spanning from frictionless transport to outer space exploration,” remarked Professor Glen McHale, executive dean for Engineering and Environment at the university.

In lay man’s term, trips to Mars might not be a one-way affair in the future as there could be enough energy generated and harvested to help power spaceships to travel between Mars and Earth.