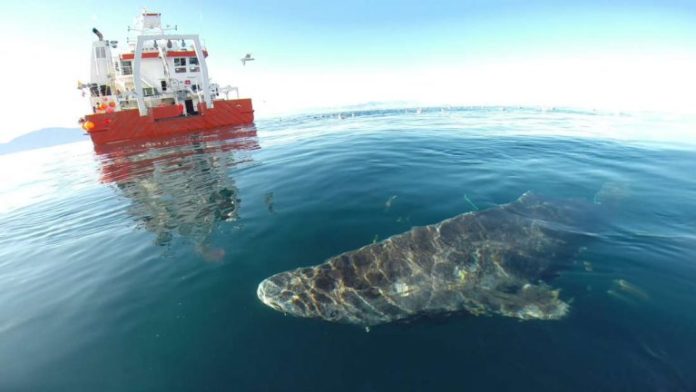 The oldest living vertebrate is a shark already known for being very mysterious.

There are animals that are known for living a very long time, such as the giant tortoise or Bowhead whale. These animals live for hundreds of years, and no one thinks twice about it because it’s typical of their species.

However, scientists think they may have found that a different animal is the longest living vertebrate thus far, and they discovered this by getting creative. During a scientific survey of Greenland and its surrounding waters, 28 female Greenland sharks were caught as by-catch and tested for their age by collecting a layer from their eye lenses.

One of them, an average-sized, 17-foot female, was estimated to be anywhere between 272 and 512 years old. This is a huge range, and it’s because the method used to determine their age is so different from traditional methods.

Greenland sharks are still a bit of a mystery, as few studies have been conducted on them. People have known for quite some time that they are among the slowest sharks in the world, which may help them sustain life for so long, since slower beings tend to live longer.

Most animals’ ages can be determined by examining the growth rings around the spine, as you would with a tree trunk. However, Greenland sharks are “soft sharks,” and their bones are too soft to hold growth rings.

Instead, researchers developed a new technique, in which they carbon-dated the eyes and measured their exposure to the nuclear testing that occurred in the 50s and 60s. Sharks born after this date showed signs of radioactive isotopes in their eyes, and those born before that had no traces of them.

Julius Nielsen of the University of Copenhagen collected the eye lenses of the females caught and was able to determine that the oldest of the females sampled was likely 392 years old, despite being a little uncertain because of the huge range.

Since this technique of carbon-dating with their eyes is so new, pinpointing the exact age is difficult. However, since the female was only an average-sized one, scientists believe that many others that grow to be bigger can live well past four centuries.

Even if the female was at the lowest estimated age at 272, she would still beat the second oldest vertebrate, which is a Bowhead whale that was found to be 211 years old.

This information is huge, especially because the lives of Greenland sharks are still shrouded in mystery. Scientists still don’t know where or how they give birth, how they mate, and no one has ever seen them eat. They live both up at the surface and over one mile deep into the ocean, but their bodies are always very cold.

It’s very surprising that a shark has taken the spot as the oldest living vertebrate, and scientists are excited to learn even more about this enigmatic creature.

This article (Scientists Came Across Oldest Living Vertebrate, But They Never Expected It To Be THIS Animal) is free and open source. You have permission to republish this article under a Creative Commons license with attribution to the author and TrueActivist.com