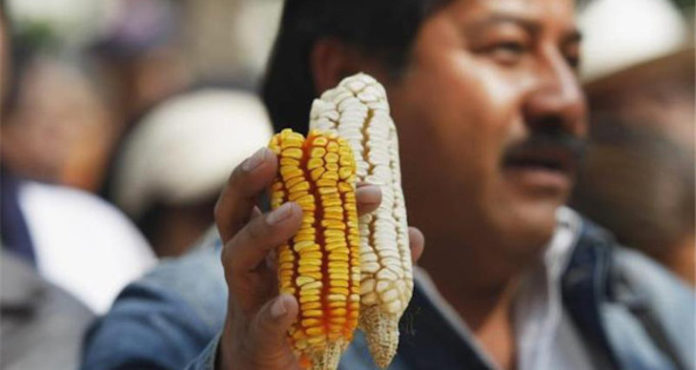 By: Alex Pietrowski / (The Waking Times) Monsanto must now consult with indigenous communities throughout the Yucatán peninsula before they will be granted any future permits for GMO soy farming, as of a court decision in early November 2015. Monsanto planned to farm genetically modified soybean in over 250,000 hectares of the Yucatán region, yet a Mexican court has suspended the Biotech giant’s permit. The judgement was based on constitutional law that requires the consideration of indigenous communities affected by development projects.

The key organizations involved in the effort to stop GMO soy farming in Mexico were the Maya beekeepers, made up of about 15,000 Maya families who produce and collect honey and who filed the injunction, with the support of Greenpeace, Indignación and Litiga OLE. The Mayans primary concern is that “growing the plant requires the use of glyphosate, a herbicide classified as probably carcinogenic,” putting their communities, environment and economic activities at risk.

Not surprisingly, Monsanto continues to argue that GM soybean has no effect on bees or honey production. Monsanto has already been accused of contributing to the deforestation in the state of Campeche, Mexico, where it has been expanding its agrochemical interests.

Since 2013, transnational agrochemical companies have been aggressively seeking permission from the federal government to lift the provisional ban on the sales of transgenic maize seeds in the country. Even though the ban was overturned in August 2015, a new court decision also in early November, made by federal judge Benjamin Soto Sánchez, head of the second Unitarian Court in Civil and Administrative Matters of the First Circuit, “upheld a provisional suspension prohibiting federal agencies from processing and granting the privilege of sowing or releasing into the environment of transgenic maize in the country.”

This latter victory against Monsanto is a result of activist organization Colectividad en Defensa del Maíz (CDM), which was also supported by Greenpeace México. René Sánchez, the attorney for CDM, applauded the court’s decision and stated that sowing of transgenic seeds

“threatens the biological diversity, agricultural activities and culture of Mexico.”

About 30% of maize farmed across Mexico and 30% of soy in the Yucatán are currently grown from GMO seeds. Mexico also imports GMO yellow corn from the United States, where it accounts for about 90% of the market. Mexico is part of a larger Latin American movement to stop Monsanto from expanding into the territory.

This article (Victory In Mexico: Indigenous Activists Win Major Court Rulings Against Monsanto) is free and open source. You have permission to republish this article under a Creative Commons license with attribution to the author and The Waking Times.