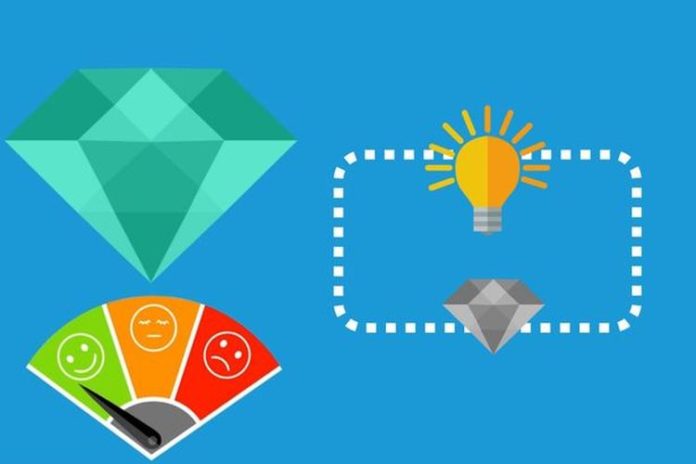 A team of physicists and chemists from the University of Bristol have developed nuclear waste–powered radioactive diamond batteries that last more than 5,000 years. The new technology — which uses a man-made diamond that generates a small electrical current when placed in a radioactive field — could simultaneously help solve the problems of radioactive nuclear waste, clean electricity generation, and battery life, the researchers claim.

Tom Scott, Professor in Materials in the University’s Interface Analysis Centre and a member of the Cabot Institute, elaborated:

“There are no moving parts involved, no emissions generated and no maintenance required, just direct electricity generation. By encapsulating radioactive material inside diamonds, we turn a long-term problem of nuclear waste into a nuclear-powered battery and a long-term supply of clean energy.

“We envision these batteries to be used in situations where it is not feasible to charge or replace conventional batteries. Obvious applications would be in low-power electrical devices where long life of the energy source is needed, such as pacemakers, satellites, high-altitude drones or even spacecraft. There are so many possible uses that we’re asking the public to come up with suggestions of how they would utilize this technology by using #diamondbattery.”

The video below explains how the nuclear waste–powered diamond batteries work:

Therefore, to significantly improve the efficiency of the prototype diamond battery, the team is working to use salvaged carbon-14, a radioactive version of carbon (having a half-life of 5,730 years) generated in graphite blocks used in nuclear power plants to moderate the nuclear reactions. A half-life of 5,730 years means in 2,865 years the carbon-14-powered diamond battery would still generate 50% of its initial power.

This means a battery built in 2016 could run on full power until the year 7746. The team hopes to create their first carbon-14 batteries in 2017. Scott told MailOnline:

“An alkaline AA battery weighs about 20g, has an energy density of storage rating of 700J/g, and uses up this energy if operated continuously for about 24 hours. A diamond beta-battery containing 1g of C14 will deliver 15J per day, and will continue to produce this level of output for 5,730 years — so its total energy storage rating is 2.7 TeraJ.” Since carbon-14 is concentrated at the surface of graphic blocks, the team claims, it becomes possible to remove the majority of the radioactive material and incorporate the extracted carbon-14 into a diamond to produce a nuclear-powered battery.  Dr Neil Fox, member of the CVD Diamond Lab based in the School of Chemistry at the University of Bristol, added:

“Carbon-14 was chosen as a source material because it emits a short-range radiation, which is quickly absorbed by any solid material. This would make it dangerous to ingest or touch with your naked skin, but safely held within diamond, no short-range radiation can escape. In fact, diamond is the hardest substance known to man, there is literally nothing we could use that could offer more protection.”

Nuclear energy is carbon free, so it is an attractive alternative to fossil fuels; though nuclear energy itself doesn’t contribute to global warming, nuclear waste makes fission bad for the environment and human health. Although nuclear waste is carefully stored and maintained, nuclear power reactor accidents — such as the 2011 Fukushima Daiichi nuclear disaster that displaced 50,000 households after radiation leaked into the air, soil and sea — can result in a variety of radioisotopes being released into the environment, thus posing serious health hazards.

A typical nuclear power plant creates around 2,300 tons of waste annually. The United States alone is currently stockpiling 75,000 tons of nuclear waste. The UK currently holds about 95,000 tons of graphite blocks, and extracting the carbon-14 from them to use in diamond batteries would reduce the cost of storing or re-processing the nuclear waste.

This article (Scientists Invent Nuclear Waste–Powered Diamond Batteries that Last More than 5,000 Years) is a free and open source. You have permission to republish this article under a Creative Commons license with attribution to the author and AnonHQ.com.